One of the things I like about the writing of Briane Pagel is that you can kind of see the questions that must be going through his head that inspire the stories he writes. So, like, with the After, you can see the questions about Heaven and the nature of Heaven that inspired the novel. And, so, Temporary Anne 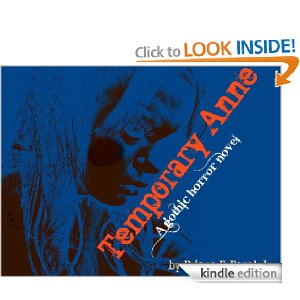 And, actually, in this instance, I'm glad I can't see what's in Briane's head to give him ideas for all of the horrible monsters he creates for this book. And they are. Horrible, that is. And fairly disgusting. But, you know, when designing minions from Hell, they ought to be.

However, as repulsive as his creatures are, they do not approach the level of repulsiveness that his main character attains. I don't think I've seen a truer example out there of the anti-hero. On the one hand, she's trying to escape Hell, and, well, it's Hell, so you are kind of wanting her to do that. But... well, the "but" is full of spoilers, but there comes a point when the idea of her escaping for any longer is not something you want to see happen.

And, as bad as she is, she is not the worst character in the book.

From a train wreck perspective, reading this book is like watching one. And it's fascinating. If you like horror, this is definitely a book worth reading.

However, there are editing issues. Some of them, most people won't notice. Like the punctuation stuff. But the verb tense mistakes might catch some people, although I'm not convinced that most people will notice.

Overall, I'd give the book a B. Maybe a B- because of the editing issues. Definitely worth $0.99, though.

Included at the end of the book is a series of short stories by various writers including one by yours truly. So here's the thing there: I was going to release "The Magic Cookies" as an individual story for $0.99, so, of course, I think the $0.99 price for Temporary Anne is more than worth it. And, hey, "The Magic Cookies" is a funny story, and you should all read it.

I'd review the other stories included except that I haven't quite gotten that far. I finished Anne because that was my priority, but that's it. However, Rusty has a story in there that is, at least, part of one that I've read. I'm not sure if it's the whole thing (because it looks too short from what's in the table of contents), but, however much of that story that's in there (all or part), it's also well worth the read. What all of this says to me is that for less than a buck, this book is a steal.

[Note: Once I finish the short stories, I will post an update with short reviews of those. Except "The Magic Cookies." I can already tell you that that one is GREAT and you should run right out and read it. Oh, wait, you don't need to run anywhere. Even better!]
Posted by Andrew Leon at 9:24 PM