So, okay, you got me. There's really nothing to do with justice and Lego (by the way, did you know that "Lego" is the plural of "Lego"? (I think I mentioned this before, but I don't feel like checking)) in  this post. At least not together. I suppose if this was a Lego Batman post, we could talk about Lego and justice together, but it's not. No, this is about the Lego exhibit they have every year at the Fair. (We'll get to the justice part in a bit.)

The arts and crafts stuff at the Fair always includes a fairly large Lego exhibit which is something we spend a lot of time at. At least, we spend a lot of time at it in comparison to the other arts and crafts. Mostly, this is the fault of the boys. Actually, my wife and my daughter usually just glance at them and go do something else while I hang out with the boys while they examine every piece. Okay, not every piece, because my younger son has incredible disdain for kids who send in their boxed kits as their entries.

And I get it. It's supposed to be original creations. But, you know, how do you tell that to a six-year-old? Or to his parents that don't really know the difference. Or the judges who are almost certainly old(er) people that barely know what a Lego is. Yeah, I know I'm generalizing and stereotyping, but, since the contest is supposed to be about original creations and (at least) half of the entries (including some that win prizes) are just kits you can buy at the store, I have to assume that these people don't have any working knowledge of Lego.

Anyway... there have been some really incredible builds the last few years. Some guy made a huge model of a scorpion (and, when I say huge, I mean somewhere in the 3-4' long range not counting the tail) from the technic type pieces and, I'm assuming the same guy, some other similar type bug thing another year. I wanted to share pictures of those, because there was nothing quite so impressive this year, but... well, I can't seem to find those pictures. [They got put into storage (off my computer) at some point, and I don't know where they are (probably because we moved since I did that). And I did, actually, spend several hours looking for those discs to no avail.] All of that to say, you'll just have to be satisfied with the pictures of this years' creations (and hope that I find those other pictures at some point in the future). 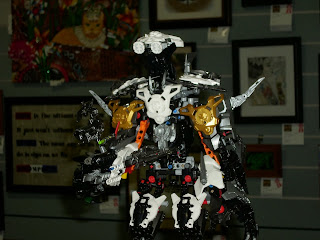 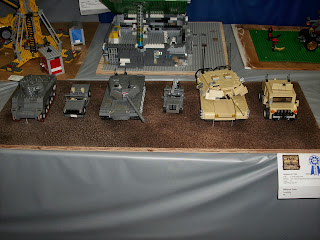 My son assures me that these are not from kits (and I don't know of any kits of these, but they are so well done, I thought, maybe, there was some older line of military vehicles or something that I didn't know about). As you can see, they won first place in their category. 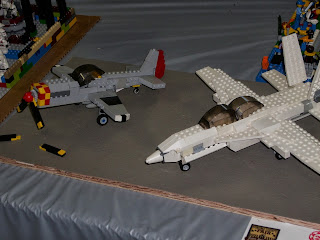 Yes, someone touched the plane on the left. My son really wanted to fix it, so I had to remind him about his feelings on the subject and whether he'd want someone he didn't know fixing it if it was his creation.
(I wanted to fix it, too.)

And, now, for the most impressive thing this year
(which is nowhere near as impressive as the things from the last couple of years). 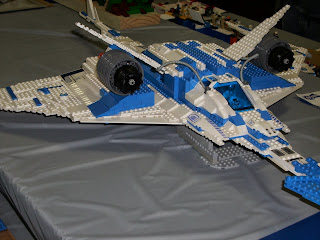 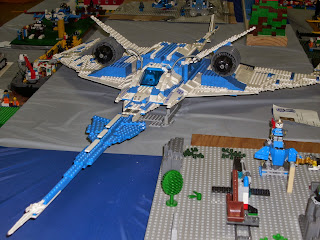 That's the Lego show from this year.

My son always wants to enter something, but, when presented with the knowledge that he would have to submit the piece for judging at some point before the Fair starts and that it would be on display for weeks (where other people could touch it and potentially break it), meaning that he could be without his Lego for more than a month, he always decides he'd rather not. Then, he walks around grumbling about how his thing was better than this-or-that thing. Except he never said that about those Lego creatures. That just made him want more Lego so that he could build something that big. I told him when I sell a million books that we'll talk about it.

Today is the penultimate release of the Shadow Spinner serialization! Yes, the end is almost here! Want to find out what happens to Tib, Michael, and the Man with No Eyes? Well, this is your chance to do it. Not to mention the Serpent and... the Angel, Uri'el! This is one climax you don't want to miss! Grab "Justice" today!
Here's your list of today's FREE! offerings:
"Part Thirty-three: Justice" (FREE! Monday, September 23 and Tuesday, September 24)
"Part Thirty-two: The Gate"
"Part Thirty-one: The Serpent Strikes"
"Part Thirty: Called in Judgement"
"Part Twenty-four: The Serpent"
"Part Twenty-three: The Harlot"
"Part Twenty-two: The Undying"
"Part Seventeen: The Tree of Light"
"Part Sixteen: The Dark Tree"
That's only nine parts this week, but, hey, running these things for FREE! every week uses up the free days pretty quickly. Next week: "Part Thirty-four: Uri'el" and, maybe, something else new!
Posted by Andrew Leon at 9:54 PM