It's Time For More Accordions

As I have mentioned (though not in a while), my daughter plays the accordion. She's closing in on three years of playing and is busy practicing her Christmas music right now. It's kind of driving her brother crazy as he is somewhat offended by the need for Christmas music in September. But, at least, it's not like all of the Christmas stuff that will soon start appearing in stores. If she wants to be able to play Christmas music this year at Christmas, she has to practice now. But I digress...

The 23rd Annual Cotati Accordion Festival was back in August, and my daughter played onstage there for the second time as part of their Future Accordion Stars segment. 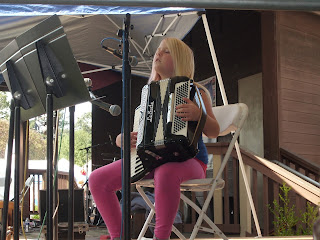 It's not a long set or anything, but, still, it's playing in front of a crowd. She was a little nervous, but she did a great job. And, well, hey, it just makes me proud to watch her up there playing.

Beyond the Future Accordion Stars, however, the acts, overall, were not as good this year as last year. I feel confident saying that since we were there for huge chunks of time both days this year. For instance, there was a guy that played for a full hour right after the Future Stars, and he just did what I'm calling free-style accordion playing. I suppose it was somewhat akin to jazz, but, mostly, it just sounded like a lot of noise. To me, at least. A lot of people seemed to like it. There seemed to be a lot of that kind of stuff this year, which really didn't appeal to me.

But there were some good acts, too. For instance, my daughter's aunt's band played (yes, that would be my sister-in-law, but I'm framing it as "my daughter's aunt" because it was her aunt that inspired her to want to play the accordion (completely on accident)), and they're really good and have played private parties for the likes of Coppola. They put the lie to "If you admit you can play the accordion, no one will hire you in a rock and roll band."

Also, there was this band called Sweet Moments of Confusion (great name, right?) that was really quite good. They played all original music based on various folk styles. I wish they had been playing instead of the other dude that wasn't playing anything that had been composed. 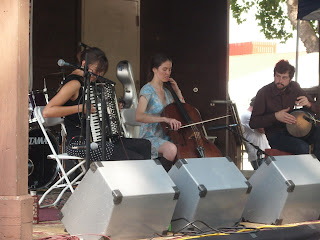 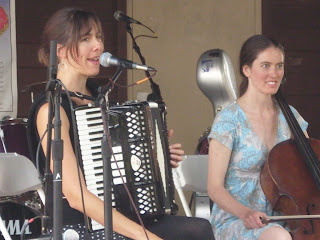 And, of course, returning for his 14th year at the festival was The Great Morgani. He really is just a lot of fun. Like last year, I only managed to get pictures of him in one of his costumes (although we did get to see him twice, this year (and the costume for the show I didn't get pictures of was hilarious)). 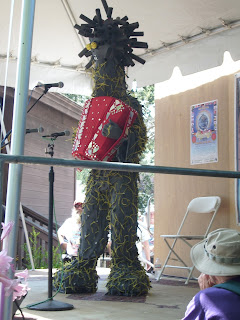 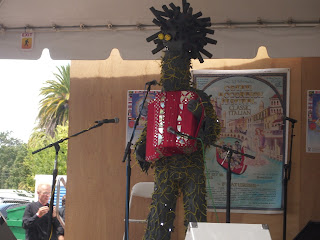 I don't think I'll ever understand how he can play in all of these elaborate costumes, but he does. Even when his shoes start to "sink," which his monster shoes did. He had to warn us that the foam was settling so that if he suddenly fell over backwards we'd know why. Here's a picture of him walking around in the crowd after playing: 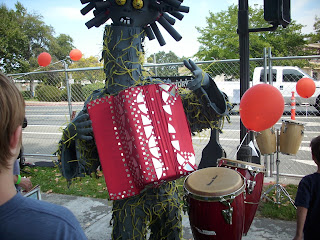 My official opinion is that the accordion is an under appreciated instrument. It's too bad, because it can do a lot and requires a lot of talent. People think it takes a lot of work to do something like play the piano, and it does, but my daughter is just picking up the piano as a side-effect of playing the accordion. You can't just pick up the accordion as a side-effect of the piano. I'm glad she's chosen an interesting instrument to play, something that stands out, even if getting hired in a rock-and-roll band becomes more difficult.

One last picture of a band whose name I don't remember: 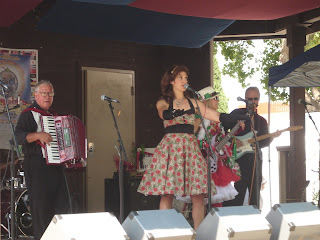 (It took me a while to get that the red and green was about the Italian flag and not Christmas. heh)
Posted by Andrew Leon at 9:30 PM