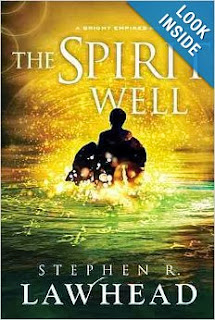 The Spirit Well is book three in Stephen Lawhead's Bright Empires series currently scheduled to have five books. I reviewed book one, The Skin Map, here and book two, The Bone House, here. The titles of these books are great, and, as I've said before, I  love a good title. Book four is called The Shadow Lamp. Hmm... shadows... I have this thing for shadows.

As I mentioned in the review for The Skin Map, I started out not really liking the main character, Kit, of this series. He was... well, wishy-washy, at best. He spent a lot of that book whining and complaining and, honestly, by the end of it, I was pretty sick of him. If it hadn't been by Lawhead, I may not have continued on.

But I'm glad that I did, because Kit really grew into himself as a character in the second book, which probably had a lot to do with the tragic ending of the first. In the second book, we see Kit take control of himself and strengthen his will and resolve. He becomes a character that takes action rather than just trailing along behind. Of course, he doesn't really know what he's doing, but he means to do it well.

The third book gives us a Kit that becomes strong in body and mind, too. In many ways, he has no choice in the matter considering he gets trapped in a stone age past (but, remember, this isn't time travel) with a clan of cave men. By the end of his time there, he doesn't want to leave. It's interesting character growth and I really enjoyed those sections of the book.

The book, on the whole, centers on character growth and story growth. The plot doesn't really advance, but we do see it filled out and some of the missing pieces from the first two books filled in. There's also a new character, which seems a little late to me for her to be coming in in book three, but we'll see how that plays out. She seems to be important and much of the book centered on her journey to get her up to the same point as the rest of the characters. She's not the only new character, but the rest are characters related to the Arthur story line, so they weren't like bringing in a whole new plot thread.

So, overall, the book kept me engrossed, and I really want to know where Lawhead is going with all of this. There are hints of a larger "quest," "quest" being used in the sense of (King) Arthur's Quest for the Holy Grail, and, in some ways, this is a parallel type story to that. There are definitely Grail Quest overtones, at any rate, not to mention the use of "Arthur" as one of the character names. And, then, there is that Lawhead has actually written one of the best Arthurian series I've ever read, so, I suppose, it would be difficult to escape those things. To say the least, I am looking forward to the fourth book (as soon as it's out in paperback).

One thing, though, these are not in any way individual books within a larger story line. You can't grab book three and expect to understand what's going on, nor can you read the first book and expect a satisfactory ending. There is just one story, here, being told across multiple books. So far, it's a good story.
Posted by Andrew Leon at 11:16 PM