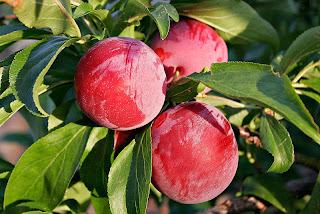 Plums were like... they were like great, big, giant grapes (yes, I know those are redundant adjectives, but that's how I thought of them as a kid, and kids like to use redundant adjectives). That's what they looked like, anyway, giant, non-green grapes, so my cousins and I were always excited about the prospect of plums.

There was only one problem. They were always a disappointment. Plums were never as good as they looked like they ought to be. As I grew up, I continued to love the idea of plums, but the reality of them was always such a disappointment. They just kind of don't have any flavor.

I started to kind of hate them.

I thought the whole thing with the plums was just me, and, every so often, I'd buy a few just to see, you know, if anything had changed. Maybe, just one time, I would eat one, and it would be as good as it looked. That's never happened. At some point after some years of marriage, while doing that hopeful "maybe this time" thing, I found out that my wife felt the same way about plums as I do.

It wasn't just me! And, well, maybe it's everyone. People just eating plums because they look like they ought to be the most awesome thing ever when they're really not. My daughter, though, she likes them, but, then, she is the one in our family who really likes processed foods, and plums are the closest thing you can get to processed food flavor in a fresh fruit. So, well, maybe people really do like plums since people mostly really like processed stuff better than natural stuff. Hence McDonald's.

As far as I'm concerned, plums are merely an illusion. A fabrication of something better than they actually are. Sort of like people. Mostly, that's okay, that thing with people being an illusion of whom they'd like to be rather than what they really are. I think we just accept that and go about our business. But it's disappointing when you're actually forced to take a bite... um, I mean, deal with someone and you're confronted with the reality that we try to ignore on a daily basis.

I'm sure everyone has had to deal with that in some form or another. It's just difficult to avoid. Like that time in college when my cousin called me at 1:00am because he had a flat and would I please come change it for him. Because, really, me? as the mechanic guy? I'm just not that guy. But I dragged myself out of bed and drove the 45 minutes to where he was and I fixed his tire in the middle of the night. A week later, I needed a ride to somewhere we were both going, and I was mostly on his way to the place, and he totally blew me off and wouldn't give me a ride. Yeah, I'm sure everyone has had their "plum" incidents.

Back when I was first writing The House on the Corner, I ran into this kind of stuff a lot. I was reading chapters of the unfinished book in one of my kids' classes, so I had people asking me about the book all the time, about when it would be finished, and about how they just couldn't wait to buy a copy. So, eventually, it was finished and, then, it was available as a book... and, foolishly, I thought some of those people were actually going to buy the book. Sure, I knew not all of the would, but I expected some sales. I think I had two, so, I guess, technically, that was some. But it was very disappointing. It wasn't like I'd been pushing the book on anyone or trying to get them to buy it or anything. These were people that were coming up to me, initiating the conversation, and saying, "I can't wait." And, you know, I get that they were trying to be supportive, but they were doing it by offering me an illusion. By looking better than they were.

I was reminded of all of this through my recent experience with collecting the first five Shadow Spinner parts into one edition: "Shadow Spinner: Collection 1: Tiberius (Parts 1-5)." I hate asking people for favors or for help because of the... "plumness" of people, and that situation is why. It makes it difficult, sometimes, to think that any of this is worth the bother. [Not the writing, I'm not talking about that. I about talking about this. >spreads arms out to encompass the blog<] I mean, not that I went out in the middle of the night to change the tire on my cousin's car so that he would "return the favor" and give me a ride later--I didn't know I'd even need that ride--but you'd think that getting up in the middle of the night, driving nearly an hour, and changing a tire in the dark (and only the second flat I'd ever changed) would earn you some consideration, right? But that's the fault in the thinking. You can't expect any consideration or anything back. You do what you do because you do it, just like I would have gone to help my cousin even if I'd known he'd refuse to give me a ride the next week. And I'll keep doing what I do because it's what I do and I want to help other authors out by doing reviews and putting their stories in my stuff so that other people that might not normally come across that author will get the chance to do so and, well, whatever else I think of to help out.