The Man in the High Castle (a book review post) 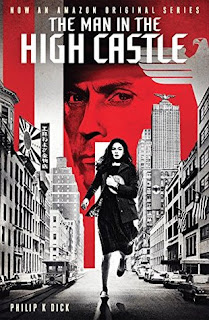 As I've said previously, any good adaptation should make you at least curious about the source material, hopefully beyond, "Oh, it was based on some book," though I'm sure, people in general not being much for reading, that's where most people stop. But not me!

And, well, looking at the list of books PKD wrote, I can see that I haven't read enough of his works anyway.

Let's just get it out of the way that the Amazon series is only loosely based on the book, which is fine when that's what you set out to do and how you present it. The series, being a format which is ongoing, is able to do a little bit more with some of the concepts Dick introduced. But don't think that if you've watched the series that you have any idea of what the book is really about. You should definitely read the book.

The obvious premise of the book has to do with what the world might be like if the Axis powers had won World War II. That's a frightening thought, isn't it? What would the world be like under a totalitarian rule that covered most of the planet? It's a theme that unexpectedly resonates with our current political climate. Unexpectedly, because we all thought we had put that kind of shit behind us long ago, but here we are with a president (#fakepresident) with all of the leanings of a fascist dictator. If only, you know, people (Democrats) would just get out of his way and let him take over the world.

The book is fascinating on many levels, but Dick's use of language is one of the most interesting aspects. The characters are loosely grouped into two categories: the Japanese and the German, though the individual characters are not necessarily Japanese or German. When the focus is on one of the characters in the Japanese group, the prose (not just the dialogue) is stilted. There's a noticeable lack of articles. The dialogue and prose when centered on one of the German-side characters is fairly standard. There also seems to be a difference in thought processes from one side to the other, but it's possible that's just the prose speaking.

Then there are the characters: a Jew hiding out in Japanese territory under an assumed name, which is still not safe, because the Japanese and Nazis are ostensibly allies and it's routine for Jews to get sent to Germany for extermination when discovered; a "white," which is how the Japanese think of Americans in the part of America they control (just a white), small business owner who is enamored of Japanese culture and thinks they deserve to be in charge; a Swedish businessman on a trade mission to San Francisco; and more, but that should give you a taste. Almost none of the characters are precisely what they seem, though, an experience possibly like pulling on a rope only to find out it's a snake as it gets closer to you.

Maybe not as much as, say, 1984 or Brave New World, but this is definitely a book for our time and definitely worth a read. And I'm again reminded that I should really explore of PKD's works.
Posted by Andrew Leon at 12:00 AM