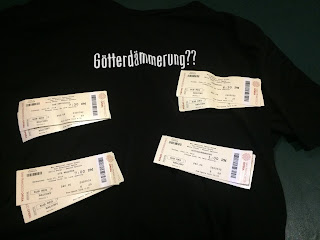 My wife went to the opera, and all I got was this t-shirt...
Okay, well, that's not precisely true since I also went to the opera. In fact, I'm the one who wanted to go to this... exercise in endurance. Seriously, why does your butt hurt from sitting? Isn't that what it's made for?
Okay, maybe not.

For an opera named Twilight of the Gods, there are not a lot of gods in this one. In fact, an appearance by one lone Valkyrie is about as close to a god as we get, and the Valkyries, though immortal (other than Brunnhilde, who is no longer a Valkyrie), are not quite gods. It was kind of weird to not have Wotan show up at all, but he's gone and locked himself up inside of Valhalla -- along with all of the other gods -- and is waiting to burn it all down. Yeah, I'm not going to try to explain how we got to that point; you can go read a plot synopsis if you want to.

I think I should make it clear that Siegfried is an asshole. Sure, he's the greatest hero in the world, but that doesn't make it okay to be a blatant, flaming asshole. Which he is. Seriously. His go-to response to any and every situation, including just meeting someone, is, "Hey, I'm going to fight you!" Occasionally, he'd throw in, "...or we can be friends," but that isn't the norm.

And he's an abuser of women. Not like he beat them up or anything, but he definitely had that "I'm famous, so I can grab 'em by the pussy" attitude. At one point, the Rhinemaidens are trying to warn him that he needs to give up the Ring or he's going to be dead before the end of the day, and his response is, "I'll tell you what: Why don't all three of you have sex with me, then we can talk about the Ring." Of course, when they reject him, his response to that is, "Well, I'm faithful to my wife, anyway." His wife who is not Brunnhilde, because -- remember last post when I said he was stupid? -- he got tricked into drinking a potion that made him forget all about Brunnhilde, so he married someone else, a woman named Gutrune.

Toss into this mix Hagen. Hagen is the son of Alberich via the rape of Gutrune's mother and merely a tool of Alberich to try to reclaim the Ring. Because, evidently, that's the primary purpose of children: to be the tools by which you accomplish your own goals. At least that's what we can learn from Alberich, Mime, and Wotan. Oh, also, Hagen has a thing for his half-sister and keeps trying to put the moves on her.

It's all a very sordid affair and that's before Brunnhilde gets involved.

All of that to say that I didn't feel bad at all for Siegfried for what happens to him. Okay, maybe a little bad, but only because he has a moment of being horrified at what he's done to Brunnhilde once he regains his memory, just before he's... well, that would be telling. The problem is that he's regretful for the unintentional asshole move he made but, apparently, is perfectly okay with all of the other ways he's an asshole. Needless to say, Siegfried is a flawed hero, which is not a bad thing from a story perspective.

A thing I really liked in this production is the handling of the Rhine and the Rhinemaidens. Back in Das Rheingold when we first meet them, they are playing and cavorting in a pristine Rhine river. The world is young! Everything is fresh and good. But, when we find them again, here in Gotterdammerung, the Rhine is clogged with trash and pollution and the maidens seem to spend their time trying to get garbage out of their river. It was a very pointed touch, one I thought was great, especially now as we endure an administration that is doing everything it can to actively destroy the environment.

The most interesting aspect of Gotterdammerung is Brunnhilde's persistence in "punishing" Siegfried for the harm he did her even once she realizes it wasn't really his fault. But, then, some of what he did was because of whom he was as a person, which, as I've pointed out, wasn't all that great. So what wrongs does he do to Brunnhilde?
1. He compels her to have sex with him even after she has asked to remain pure. But she's cursed to obey his every order, so she can't actually turn him down when he presses the issue.
2. Once he's forgotten her, he enacts a subterfuge against her and gifts her to another man whom she is also compelled to obey through the curse on her.
3. You can surmise at that point that she has had to have sex with the second man, also against her will, though she would not have been able to actually tell him no. Thanks, Wotan!

The real tragedy in all of this is that Brunnhilde legitimately loves Siegfried. As she tells him, she loved him from before he was born. However, she doesn't let how she feels get in the way of what she feels is justice for his betrayal of her.