Issues in Story Telling: Marked by a Lack of Tragedy 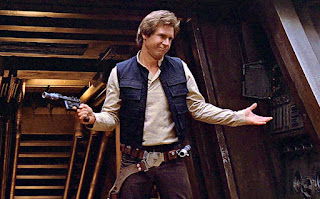 Those of you who keep up with this sort of thing probably already know that Solo has been under performing as a Star Wars movie and is looking to come in as the lowest grossing Star Wars film ever. Considering the subject matter, everyone's favorite smuggler, this is rather surprising. And alarming. It's caused some pondering on my part.

I thought it was a fine movie. Enjoyable. But I didn't love it. "Fine" is not a great recommendation for a Star Wars film, not from me, at any rate. Of course, the problem is that it's not getting a lot of love from... anywhere. The big question, then, is why.

I think I know the answer. Which is not the answer that everyone else is giving; all of those answers have to do with the problems on set, the firing of the original directing duo, and the fact that something like 70% of the movie had to be re-shot. The actual answer is much simpler: The movie is marked by a lack of tragedy.

It's not that every movie needs to have some kind of tragedy, but, I think, Star Wars movies do. They, at least, need to have that feel that there's something that could be lost, and that's true for most all stories. The risk of loss is what provides the tension in a story. Even when you know everything's going to turn out all right in the end, there needs to be that feeling of risk involved. That just doesn't exist in Solo.

Really, the whole movie can be summed up by that first game of sabaac. Han enters the game with nothing. He can't even get into it without someone else fronting him the money to get a seat at the table, which she does because... I don't know. As a business venture, it wasn't wise, because the only thing she has to go on is Han's word, "I can take him." (Or something to that effect.) So Han's in the game with absolutely nothing to lose. It doesn't matter that he wins enough to have a stack of money in front of him; if he loses, he's no worse off than he started.

And he does lose. But, you know, big deal. And Lando doesn't seem to care, either, that he doesn't have the ship he claimed to have which he'd put up against the Falcon in their final hand. It just doesn't come up again.

At any rate, you can't feel bad for Han's loss because he had nothing to lose, nor can you be upset at Lando for cheating, because Han was cheating, too, even if not so directly as having a card up his sleeve.

And you can't feel too badly for the loss of Han's "friends," either, since those relationships were about as real as the ship Han lost to Lando during their game of sabaacc. They're not friends just because you declare them so, no matter how much the writers wanted us to believe it. Tobias just doesn't become a Qui-Gon and there's no sense of loss when he dies; it doesn't matter that Han pulled the trigger. In fact, it's probably because Han pulls the trigger that, as the audience, we're so easily able to shrug it off.

I just wish it didn't make the movie so easy to shrug off, which I think it is. That's disappointing to me from a Star Wars movie. The franchise seems to have lost its way without Lucas at its head to give it an overall vision. Which isn't to say that it has to be Lucas doing that, but someone needs to do it. This "let each director do what he wants" shit isn't working out. Someone needs to bring balance back to the Force before its the loss of Star Wars itself that is the tragedy.
Posted by Andrew Leon at 12:00 AM