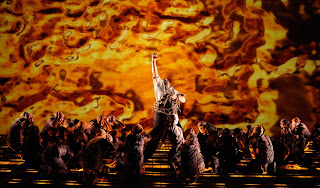 Let's start out be stealing a quote from a completely unrelated story:
"...this, like any other story worth telling, is all about a girl."
Or, in this case, three girls.
At least, that's where it starts.

Das Rheingold is interesting in that it was the last part of the story Wagner conceived. Actually, he worked his way backwards, having first thought of the arc's ultimate climax, then filling in the required backstory as he wrote. Das Rheingold is considered a prologue, so it's not entirely necessary to the rest of the arc, but it does provide some pretty interesting background.

The opera opens with the three Rhine maidens cavorting in a river, which, I suppose, is what Rhine maidens do. Their actual task is to guard the Rhine gold, but that seems to be a rather boring and thankless task, so they spend their time playing games in the water. This is what Alberich finds them doing when he stumbles upon them.

This is a recipe for conflict from the very beginning. See, Alberich is a dwarf from Nibelung, which is to say that Alberich is not handsome. That doesn't stop him from being smitten by the scantily clad water sprites playing in the river, and he decides he's going to catch one and make her his own. To say this is in direct conflict with the desires of the maidens is an understatement. Not only do they not wish to "be caught" by him but, upon noticing him and how ugly he is, they decide to have some "fun" with him, which is to say that they decide to torment him with their beauty.

There's a good analogy here for today's incel movement. Putting aside the fact that the maidens are deliberating torturing him through their flirtatious ways, Alberich has already decided that he deserves to have them. Or at least one of them. How they feel about it doesn't matter to him; he feels that he has been denied something his by right because none of the three want him.

But that would have been the end of it except for the Rhine gold.

The Rhine gold is not like normal gold. It has magical properties that can allow the possessor of the gold to forge a magic ring that will give him absolute power. The only catch is that, to forge the ring, the smith must curse love and forsake it forever. After his treatment at the hands of the maidens -- or his lack of treatment at their hands, if you know what I mean -- Alberich decides that's not such a bad deal, curses love, and steals the gold. Besides, once he's become king of the world, he can compel them to have sex with him, no love required.

This, also, sounds like the men of the incel movement. And here's where I point out that Alberich is the villain in this story. Or, at least, a villain. These guys are not heroes, no matter how wronged they feel they've been.

All of that is just the beginning, maybe the first 25 minutes or so, which is way more synopsis than I usually like to give, but I wanted to make a point. Needless to say, much of the rest of the action revolves around the Ring that Alberich forges.

This particular production was great, even better than the one I mentioned that we watched on dvd. The staging was better. The actors were better. The sets were better. In particular, the character of Loge (Loki) was better. I'm sure, at least in part, this was due to the actor, Stefan Margita, who is wonderful, but it's also choices of presentation of the character by the director, Francesca Zambello. Loge is definitely my favorite character in Das Rheingold. Greer Grimsley, as Wotan (Odin), is also a step up from the other production and is pretty amazing.

But, then, the San Francisco Opera can generally be counted on for delivering great performances.
Posted by Andrew Leon at 12:00 AM