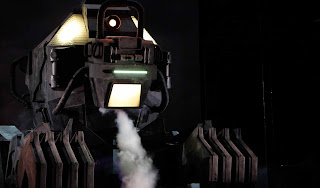 Ah, Siegfried, if only you had not been so stupid...
Perhaps.
But, then, opera contains a lot of tragedy, so maybe this was all inevitable.

However, it wasn't the dragon (pictured above) that will do him in, nor will he be done in in this opera.

You know, normally, battling a dragon isn't a thing you're going to see in a stage production. Normally, someone writing for a stage production, knowing how difficult it would be, is going to circumvent any dragon fighting on stage. Not Wagner. It makes me wonder how he staged this the first time it was performed. Not enough to do the research on it, but it does make me wonder. Of course, he did have a special theater built just for the Ring Cycle, so maybe I shouldn't wonder too hard.

Siegfried is the culmination of all of Wotan's meddling and impregnating women, the son of the twins Siegmund and Sieglinde. Maybe that accounts for his... lack... in the intellect department. Daniel Brenna does a great job with Siegfried's rather vacuous mode of being, a mode of being always looking for a fight, seemingly for no other reason than to fight. Maybe to prove that he's the best, but it seems he just approaches every situation with a "hey, let's fight" attitude. It doesn't hurt, I suppose, that he has a magic sword.

The fight with the dragon, Fafner, is important. Fafner is one of the giants from Das Rheingold; the one who ended up not dead and with the Ring. He's a dragon through the magic of the Tarnhelm, a shape he's taken to protect the Ring and his hoard of gold. So, just to be clear, Fafner has a ring which could allow him to rule the world and, yet, he's hiding in a cave in the form a dragon instead.

To flash back: Alberich, who forged the Ring, rather than using it to control the world, was busy using it to find more and more gold and amass it into a hoard, the hoard that Fafner is now protecting. At this point, I'm a bit hazy on what exactly the Ring does other than give the owner an extreme lust for gold.

Because it certainly doesn't save Fafner anymore than it saved Alberich from having Wotan cut it from his hand. But more on that later...

The best scene in this opera, possibly the best scene from the Cycle, happens just after Siegfried has defeated Fafner. See, Siegfried only fights the dragon because he was put up to it. Put up to it by his adopted father Mime, Alberich's brother, who lusts after the Ring and thinks he can outwit Siegfried to get the Ring if only Siegfried will kill the dragon. Honestly, this shouldn't have been very difficult to do but for one thing: Siegfried gains the temporary ability to hear Mime's thoughts and kills him instead. But David Cangelosi, as Mime, is fantastic in this scene. Every time he says something that comes out in words that reveal his true thoughts, his reaction is fabulous. It made me sad to see the character go.

But Mime is just another example of a "father" in this opera, using his "child" as a tool to achieve some selfish end. He needed to go.

Siegfried ends with Siegfried "rescuing" Brunnhilde, the former Valkyrie, from her "eternal" sleep, eternal being relative to however long it took a man to come along who was brave enough to walk through the flames to wake her with a kiss, so in this case about 20 years. Depending on how old Siegfried is. Of course, waking Brunnhilde just moves her along to the next portion of her punishment, the part where she has to marry the man who wakes and do whatever he commands of her.

So let's look back a moment:
Brunnhilde is Wotan's daughter, a previous immortal.
Siegfried is the grandson of Wotan twice over, since both of his parents were Wotan's kids. I believe that makes Brunnhilde Siegfried's aunt and, maybe, his cousin. It's actually a little confusing. At any rate, it's just a little more incest to add to the mix.
Oh, and, evidently, Brunnhilde is a virgin. At least, she goes on about how she's never been touched before for quite a while before she finally goes off with Siegfried to do the deed. What's a little incest among gods, um, ex-gods, right?

Just to be clear here, I'm leaving a lot of the plot out, because you can always look up the plot if you want to. My focus is on the production, themes, and pivotal moments. What I know for sure is that the Ring Cycle is a complex piece of work and I walked out of it, all 16 hours of it, being willing to go through that again for another viewing. There was no point where I was bored or felt like I was wasting my time.
Posted by Andrew Leon at 12:00 AM