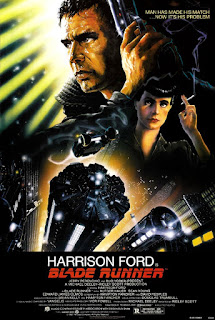 You know how in just about every cop show these days they do crazy-insane enhancements on photos in order to catch the bad guy? My kids and I were watching something recently and they were doing that, and it occurred to me that that whole thing comes from Blade Runner. As far as I know, that's the first time that was used in a movie like that, and we all know how influential Blade Runner has been. It also occurred to me that only 1/3 of my kids had seen Blade Runner, so we set about fixing that. And, well, it had been a long time since I'd seen it and, with a sequel coming out, it seemed like a good time to watch it.

I chose the original theatrical version to show them 1. because that's the version that had such a huge impact on movies and pop culture, and 2. because it's been so long since I've watched any version that I couldn't really remember what the differences are beyond that some don't have the narration. I happen to like the narration; it gives the movie that film noir detective feel that is one of its appealing aspects to me.

The first thing that became apparent is that the movie has retained its very unique look and feel. It was original 35 years ago when it first came out and, despite the amount of influence it's had on other movies, has rarely had that visual tone duplicated. That's kind of amazing, actually.

Beyond the fact the movie time is now present time and that the movie isn't anything like the present, it holds up remarkably well. And it's still a conceivable future in that none of the things in it have become things we no longer think are possible. In fact, all of the sci-fi things in the movie are on track to one day just being science. Which is kind of scary, still, especially considering the environmental implications in the movie, and we haven't done anything to stop that bit of future from happening, either.

Really, the only piece of the movie that has worn on me is Rutger Hauer. Remember back in the 80s how Hauer was such a big deal after Blade Runner? Well, I do. He was a name... that didn't last. Because he wasn't really a great actor. And that goes for in Blade Runner, too. Granted, some of the issues with his character are a matter of the directing, but I'd be willing to bet that a better actor could have pulled off some of his flubs (like the howling) more believably. Which is not to say he doesn't have his good moments, but he's probably the only real weakness in the film as a whole.

Unless you want to talk about Sean Young and her huge 80s hair, because wow... It should have been listed separately in the credits.

I'd say it's still a movie worth watching with a message that is still just as important now as it ever was. Even though I've read Do Androids Dream of Electric Sheep?, watching the movie makes me want to go back and read that again, too. I'm not going to, right now, but I want to, and you have to give credit to an adaptation that makes you want to go back to the source material. Again. And watching it again makes me both hopeful and fearful of Blade Runner 2049...

I definitely think there's more to explore in the world that was created for the first film; I just hope it's good. Harrison Ford said the script for 2049 is the best script he's ever read, but, then, he's the guy who wanted Han Solo to die, so I don't know if his opinion is trustworthy. At least Ridley Scott isn't directing it; he's more miss than hit.
Posted by Andrew Leon at 12:00 AM