The Good Place (a review, of sorts) 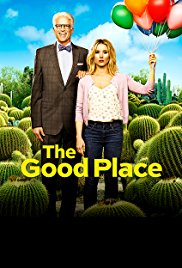 We stumbled across The Good Place recently. Which was a good thing because it's a good show. Actually, I'd say it's a great show. As I was saying to my wife just before we found this, the problem that I have with many shows is that there is no story. For instance, we've been watching Brooklyn Nine-Nine with our kids, lately, and it's a funny show; I enjoy watching it. BUT! If we never watched it again, I wouldn't miss it. I wouldn't miss it because it has no story so I wouldn't wonder what was going to be happening next. The Good Place, despite its sitcom status, has a story, a pretty great one, too. As I said, it's a great show, currently my wife's favorite show.

Part of that is because of Kristen Bell. Actually, all of the cast is great, including Ted Danson, whom I've never been a big fan of, but he's great in this. But Kristen Bell! She's just the kind of person you'd expect to find in the "good place." Which is part of why it's so funny that -- okay, spoiler alert but not really since you find this out virtually right away in the first episode -- she's not supposed to be there. Yeah, she's died and gone to "heaven"... by mistake.

Hi-jinks ensue. Because, you know, now that she's there, she can't let anyone know there was a mistake.

Oh, and Adam Scott shows up as "Trevor" a few episodes in, and he's spectacular.

So here's the thing, and it's the thing about why it's such a huge mistake that Eleanor is in the Good Place: almost no one gets in. Like, less than .01% of people get in. The system in the show is all based on how much good a person has done in the world, and only the very best of the do-gooders get into the Good Place. Everyone else goes to the Bad Place. There's this funny bit where Eleanor asks Michael who got it right, you know, about the afterlife and all of that, and Michael says something along the lines of, "Well the Christians got it about 5% right, and the Muslims got it about 5% right, basically, everyone got it about 5% right." Then he goes on to say that one guy sitting around a campfire one night doing mushrooms got it 92% right, but he was the only ever who got even close. The whole thing is kind of brilliant.

Not the getting into "heaven" by doing good things, but the part where no one has gotten it right. Because if there's one thing the religions of the world have in common it's that they, none of them, have not gotten "it" right. Oh, and they all think they have.

Which is why there should be more shows like this, shows that state bluntly, even in a comedic way, you've got it all wrong. Though this might be a show that "christians" avoid. I'm pretty sure that when I was younger I would have been offended enough by the premise of the show (that you earn your place in the Good Place by doing good in the world) that I would never have watched it no matter how funny it was. And there are a lot of people out there who are like how I was. Which is to say: stuck in dogma. Which is to say: wrong.

All of that to say that this is a show you should check out, especially if you're a "christian." While I don't necessarily agree that it's how much good we do in the world that gets us into Heaven or the Good Place or whatever you want to call it, it's certainly an idea that more of us should be paying attention to.
Posted by Andrew Leon at 12:00 AM