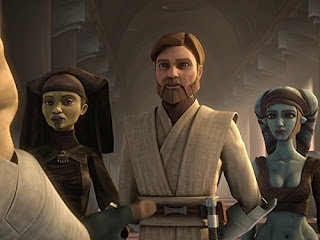 -- Madness can sometimes be the path to truth.


Sometimes the way we answer questions is to merely remove the question one step back. This is the problem with, say, crediting aliens for creating life on Earth, or, at least, human life. The question then gets pushed back to, "Well, who created the aliens?" It's a poor way to answer a question, basically, a cop out. I feel like that's what they're doing in this arc with the question, "How do Jedi talk from the dead?"

I also feel like this is a question that doesn't need to be answered, not in any concrete way. I mean, how do the Jedi do anything? The Force. It's a mystery to those of us (all of us) who aren't Jedi. Just leave the answer at that. It doesn't need an answer.

Having said that, I think this is a really great episode and an important arc. Top 10 for sure, probably top five.
Yes, I'm biased because it focuses on Yoda, a character who really, despite always being around, hasn't received enough attention throughout the series. Just casually thinking back, I can only think of one other arc that focused on Yoda as a character.

There is a thing I like very much about this episode: It highlights the way in which people, even Jedi, are unable to think outside of the boxes they've put themselves in. When Yoda is troubled and brings his question to the Jedi Council, most of the Jedi but Ki Adi Mundi in particular, dismiss what Yoda is saying as something that is impossible. They've already decided their answers on the subject because they're certain they already have all the answers. Ki Adi Mundi goes so far as to assert that Yoda must be under the influence of the Dark Side and, mostly, the other council members don't reject that notion.

Which, of course, means Yoda has to rely on Anakin for help, seemingly the only Jedi other than Yoda who doesn't get trapped in dogma. Which isn't really a great thing for Anakin in the end, but being trapped in dogma isn't a good thing for the Jedi, either, considering what's in store for them.

Anyway... This is another of those arcs that real Star Wars fans should watch. Which is not to imply that you are not a real fan if you don't watch it, but, if your interest in Star Wars goes beyond the movies, this is an arc you should see.

Oh, one last thing...
There is a question that everyone asks (I use "everyone" loosely.): Why Dagobah?
Why did Yoda choose, of all places, to exile himself on Dagobah? This episode gives some insight into that.
Posted by Andrew Leon at 12:00 AM