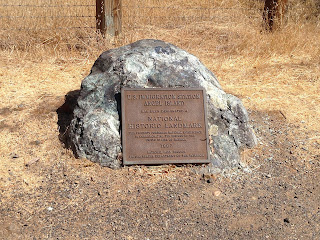 America's issues with immigration go way back before Joe Arpaio. In fact, they could be said to have started right here in California. And, really, for all of the same issues. In a nutshell, the Chinese and other Asians flooded into California during the gold rush, much like people from the rest of the world. And there was plenty of cheap labor for them, especially with the construction of the transcontinental railroad. However, when the gold rush died down and the railroad was complete, there was a glut of available bodies in the labor market, and white dudes got scared of losing their jobs, which was the same sort of fear as it is today, considering the Chinese generally did the kinds of low-paying jobs that whites wouldn't take.

But fear is fear. 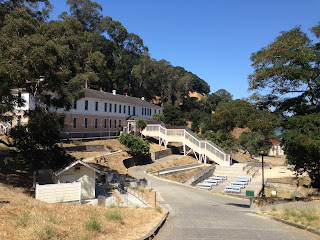 All of this lead to the Chinese Exclusion Act which lasted for six decades. Sixty years! During that time, because the Chinese Exclusion Act lead to discrimination against all Asian immigrants, Asians trying to come to America were detained at Angel Island. For weeks. At least. For comparison, European (white) immigrants coming into the United States through Ellis Island had a processing time of a few hours; Asians coming in through Angel Island had a processing time of almost a month. The men were detained in the building pictured above and WERE NOT ALLOWED TO GO OUTSIDE for the duration of their "detention." Now, while I said that the processing time was generally about a month, it was often quite a bit longer than that. Months. Sometimes more than a year.

It wasn't so bad for the women and children... unless you count the part where they were taken away from their husbands and fathers and kept somewhere else. But, hey, they were allowed some brief moments outside.

To deal with the loneliness and depression, the men carved poems into the walls of the detention center. 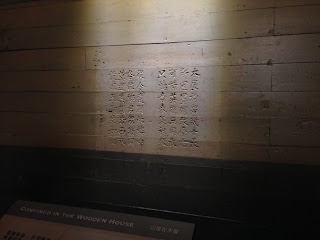 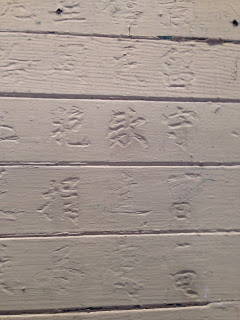 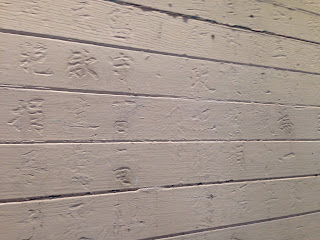 And here is a translation of one of the poems: 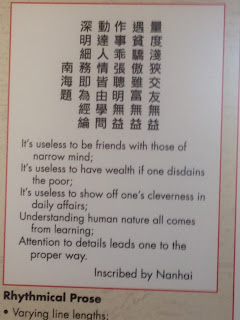 "It's useless to be friends with those of narrow mind."
And, you know, narrow-mindedness is a hallmark of conservatives. It's a fear thing, actually, because fear makes people narrow minded, unable to see possibilities, and conservatives tend to live on fear. Fear of the unknown, fear of change, fear of others.
That's not an opinion, by the way; it's what research shows.

One of the things that's been said quite a bit by those on the Right who support all of Trump's #fakepresident racist immigration policies (not to mention the Nazis and white supremacists) is, "It's not like we haven't done this kind of thing before." As if a past misdeed makes a future misdeed okay. In fact, the acknowledgement of a past misdeed, like Angel Island or the Japanese internment centers during WWII, should be motivation to not repeat the same mistake.

It's to cut out all of this white supremacist and Nazi bullshit.
Posted by Andrew Leon at 12:00 AM