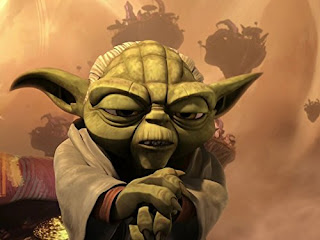 -- Death is just the beginning.

I have a question:
Why is Yoda's starfighter so much smaller than everyone else's? The lightsaber thing doesn't bother me, because lightsaber's need to fit the hand of the wielder, but the starfighter thing...? I mean, if starfighters can be smaller, they should be smaller. It makes them harder to hit. I guess the better question, then, is, "If they can make starfighters the size of Yoda's, why do the other Jedi have such large starfighters?" That seems to me to be a design flaw.

And, yes, that has nothing to do with the episode other than that Yoda's starfighter is in the episode, but it's a question that has bothered me for a while. Because the real reason is aesthetics, but I can't get behind that from a practical standpoint.

Yoda continues his journey, the quest he's been sent on by Qui-Gon Jinn. If you don't know what I'm talking about, you need to go back and watch the previous episode.

Significant things about this episode:
Yoda fights... well, let's just say it's a scene very reminiscent of that one with Gollum from LotR.
Yoda discovers some things about himself. (This is the good part.)
The priestesses are very Spirited Away.

The failing of this episode is that it's too short. Way too short. I think they could easily turn this one into an hour show and make it awesome and surreal.