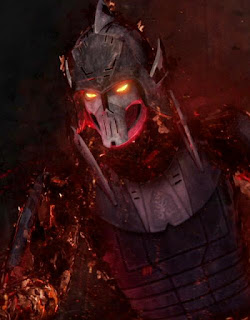 -- Facing all that you fear will free you from yourself.

[Hop over to The Armchair Squid for his take on this, the LAST, episode.]

A bit of foreshadowing for your final episode? Yes, please.
This, the final released episode of The Clone Wars, doesn't exactly have what one would call "closure." In fact, it might ask more questions than any other Star Wars anything. Maybe, it's hard to tell. And there will be spoilers here so, if you think you might possibly watch this episode, you should stop reading now.

First, Darth Bane. That's really all I'm going to say about that since I'm only bringing him up because Mark Hamill voiced him.

Then all the other stuff...

Yoda is faced with one of those "would you kill Hitler as a baby" kind of questions, except it's not Hitler, it's Anakin. During a confrontation with Darth Sidious, Sidious tells Yoda he can spare the galaxy from what it's going to face if he will just allow Anakin to die. Of course, it would be Yoda's first step onto the path of the Dark Side to do so... I want to leave it at that, but I'm sure you all know which way that went since we already know Yoda didn't go to the Dark Side, and we all know that Sidious and Vader conquered the galaxy.

We don't get an answer!

And with the series cancelled... Well, this episode in particular makes me wish Clone Wars had kept going. As I've said before, Rebels just isn't the same.

With that, I would say that this two-parter is definitely top five for story arcs. One of the top four, actually.