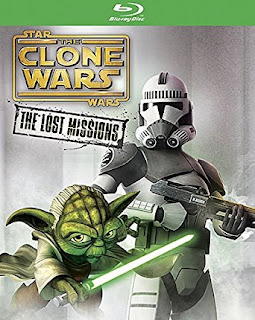 So it is with no small amount of sadness that I've arrived once again at the end of The Clone Wars. I'm not going to go back through all of the stuff I've previously said about the abrupt ending of the series... even though I want to. But that's a rant I've already been on, probably more than once, and you can go back and find those posts if you want to.

The real question is whether you should take the time to watch "The Lost Missions," especially considering they didn't actually air on the Cartoon Network along with the rest of the series. Can they be that important?

I think there are four "must see" arcs in The Clone Wars for any Star Wars fan who is interested in going beyond the movies. Two of those arcs are in season six, the first being the opening arc of the season dealing with Order 66 and the second being the two-part Yoda story that ended the season. Even if you don't watch any of the rest of Clone Wars, you can probably get enough out of these two stories to make them worth watching on their own. You won't regret it.
Probably.
Unless you make the mistake of watching the Jar Jar arc, then you might regret it.
Unless you appreciate that story for the Indiana Jones nods.
Or if you like Jar Jar, which I do.
But I still found that particular story trying. Except for the Indiana Jones stuff.

Overall, The Clone Wars is a really excellent series. There are some episodes and arcs that are... less good, but, on the whole, other than the stumble with season four, it's worth your time if you like Star Wars. Or, really, even if you don't. Despite being animated and despite airing on Cartoon Network, it's not some kids' cartoon. It deals with mature issues, and it's one of the best animated series I've ever watched. You should check it out.

There are a few more episodes that were never finished (due to cancellation!), but they're available on  the Star Wars website in their unfinished form, and I'm going to check those out. At some point, I'll have an update on those.
And I'm going to get back to Rebels. Not that I meant to get away from Rebels, but time has been limited. I'll pick back up on reviews for those soon.
Posted by Andrew Leon at 12:00 AM