The New Civil War (ongoing): The Lesson of pre-WWII Germany

One of the enduring questions from World War II is about how we got to that place. How did Nazism happen? Why didn't anyone put a stop to it before it happened?

We actually know the answer to all of those questions. We know them from an intellectual sense, anyway. We know that normal people, regular people, people just trying to live their lives and get by, people who were not Nazis or Nazi sympathizers, we know that those people didn't do anything to stop it. For whatever reason. Probably mostly because they just wanted to be left alone to live their lives and it all didn't concern them anyway. How can we blame them? They were "good" people, right?

Hey, I get it. Speaking out is hard. It messes with your life and, sometimes, there are consequences. And there were consequences in pre-WWII Germany. Some of the people who did speak out just... disappeared. And that served to keep everyone else quiet, as it was intended to.

So we know what they should have done, all those people in Germany, and, yet, we wonder why they didn't do it. Couldn't they see? And we tell ourselves, "If I was there, I would have spoken up!"

Really? Would you have? Would you?
I think there's a really easy way to know the answer to that question:
Are you speaking up now? If you're not, well, you would have been one of those Germans who just went along because you just wanted to be left alone to live your life. Or whatever.

Yes, we are in that same state as pre-WWII Germany. The state where white supremacists are growing in number and strength and boldness, and the have a man in our highest office #fakepresident who is supporting them. If you are not speaking out against them and what is happening, you are quietly joining them on their side of the line.

And, yes, there is a line.There has always been a line, but Trump #fakepresident very clearly and explicitly drew it when he failed to condemn the terrorist attack in Charlottesville. He made it clear that he is standing with the Nazis, white supremacy, the Alt-Right. He made it clear enough that they knew it and rejoiced. When you have David Duke singing your praises and are not sickened by it, well, something is wrong. And if you can side with the guy that Duke is praising, well, something is wrong.

But genocide? Really?
Ethnic cleansing is a goal of the white supremacist groups. What do you think that means?

Remember:
Today is a good day to punch a Nazi in the face. 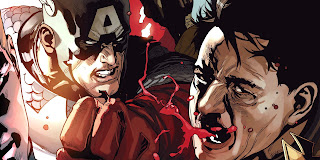 I wish I could say I meant that figuratively.
Posted by Andrew Leon at 12:00 AM