The Man Who Knew Too Much x2 (a movies review post) 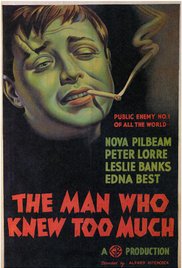 There was this singer, once, I used to follow. His first album flew way under the radar, but he had a huge hit song off of a later album that blasted him to a niche fame. Around his sixth album or so, after he was popular, he pulled one of the songs from his first album and included it on the new one. Evidently, it was a song he really liked. When asked, once, in an interview about why he re-released that one song, he said, "I didn't think anyone was listening the first time."

I kind of wonder if this was one of those kinds of things for Hitchcock. The first The Man Who Knew Too Much came out in 1934, well into Hitchcock's career, actually, but he felt the need to re-make it 22 years later. Or maybe it was just a Star Wars kind of thing and he thought he could do better. He did say in an interview once that he was only a talented amateur when he made the first one but felt himself to be a professional at the point he remade it in 1956. The 1956 version was certainly better.

Of course, I watched the '34 version first. Even without having seen the second (well, I'm sure I saw the second one when I was a kid, but I didn't have any real memory of the movie), the first one felt... sparse. There's no real development of the story to give you any empathy for the characters. The mother, played by Edna Best, seems to not like her daughter very much, repeatedly calling her names and blaming her for her loss in a shooting competition, and taunts her husband about leaving him for other men. It makes it difficult to have sympathy for her once her daughter is kidnapped.

Then, once the daughter is kidnapped, the Lawrence's go back to England and try to act as if nothing has happened. It's kind of weird.

The best part of the '34 version is Peter Lorre. He's just the right amount of creepy for a bad guy. Plus, there's a cult and some hypnotism thrown in for good measure. I suppose the cadre of bad guys in the first movie is actually more interesting even if it is a little less believable. Cicely Oates is also decidedly creepy as the kidnapped girl's caretaker/cult leader.

But the remake is immediately better than the first movie. Maybe it's the charisma of Jimmy Stewart that does it, or maybe it's just a more believable scenario, a family on vacation rather than a family of, what, Olympic competitors? (It's never really clear if they're competing in the Olympics, but the father, Bob Lawrence, lost a skiing competition and the mother, Jill Lawrence, lost her sharp-shooting competition.) At any rate, the '56 version opens with some banter between the family as they ride a bus to Marrakesh, friendly banter and story-telling. They're likable. The McKenna's, though, have a son, not a daughter.

There's much more buildup to the kidnapping in this one, and you feel the loss with the family, the frantic-ness. There's love there, and you believe the lost-ness of the characters as they realize their son has been taken and they've been given no other instruction than to keep their mouths shut about what they know. It's, then, also believable when Ben McKenna tries to work out what to do and how to save his son on his own. Not that his wife, played by Doris Day, is to be left out of things, which is something else I like about the movie. The woman is no fainting flower (unlike Jill Lawrence who literally fainted when she found out her daughter was kidnapped).

There is an important scream in each movie -- I'm not going to tell you why because spoilers -- but the two screams are also significantly different in motivation. In the '34 version it's a woman screaming from fear much like the fainting episode: It's just what women do. Or some such. But in the '56 version, it's made very clear the scream was a deliberate attention-getting act. A brave move rather than a cowardly one. It's an interesting difference.

The two movies, despite the same basic premise and a few equivalent plot points, are surprisingly dissimilar. Actually, that's easy to see just at a casual glance considering the '56 version is about 45 minutes longer. Plus, there's Jimmy Stewart. If you had to choose between the two, the one with Jimmy Stewart is the easy choice, and it just so happens that it's the better movie. Oh, and the '56 one is also in color, so there's that, too. But I would really suggest watching both. The first one is worth it for Peter Lorre alone. Seriously.
Posted by Andrew Leon at 12:00 AM