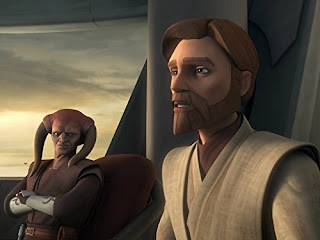 -- Without darkness, there cannot be light.

Today's episode: Jar Jar Jones and the Temple of Doom!

Honestly, I'm not sure how I feel about this episode. On the one hand, we find out that Jar Jar has a love interest...
Yeah, I'm going to stop right there.
There is humor in it, though, in that Jar Jar goes off with Queen Julia for the night and Mace Windu spends the time freaking out about where Jar Jar has gone and what he could possibly be doing. That the queen is Jar Jar's girlfriend never enters Windu's mind. Inconceivable!

The dagoyan people don't like the Jedi despite their affinity for the Light Side of the Force. They hold the belief that the Jedi are kidnappers because of their practice of taking Force sensitive children to train at the Jedi Temple. And, well, we don't know that the Jedi are not really kidnappers of a sort. All we know is that they take young children to the Temple to be trained as Jedi and that that is common practice in the Republic. We don't know anything at all about how this is carried out or whether it's with consent or how often it might not be with consent or anything. And all of this is something that's mentioned, basically, in passing, but it's the most interesting question the episode brings up.

Well, that and why anyone, even Jar Jar's girlfriend, would trust Jar Jar to solve a mystery. You'd think that someone that close to Binks, in fact, would be the last one to trust Jar Jar to handle an important task completely alone.
Posted by Andrew Leon at 12:00 AM