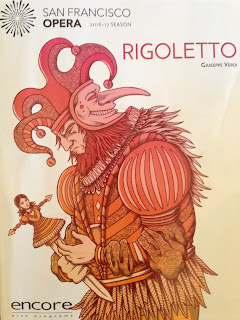 My wife and I wrapped up our 2016-17 opera season with Rigoletto, a Giuseppe Verdi opera based on a play by Victor Hugo. Neither play nor opera were received well by "those in charge," so to speak. Hugo's play, Le Roi s'amuse, was banned after one performance and not performed again for 50 years. Rigoletto also fell prey to the censors, but Verdi worked closely with the censors to make changes to the opera, like removing the action of the plot to Mantua instead of France, so that it could be performed. Let's just say that the nobility didn't appreciate either work.

At this point, I'm really tempted to give you a rundown of the plot, but you can get that elsewhere, or read Hugo's play, which the opera is very faithful to (despite the changes Verdi made to satisfy the censors). If there was ever a tragic figure in literature, Rigaletto (Triboulet in the play) is certainly it, a man reduced to life as a court jester due to a physical deformity. Triboulet is an actual historical figure, just so you know, not that I know how accurately Hugo portrays him in his play. The play is fiction, after all.

The premise, though, is that nobility, due to their high station, are able to escape the consequences of their horrible behavior in ways that other people are not able to. The idea is comparable to Don Giovanni in that it actually takes a supernatural occurrence to hold Giovanni accountable for the horrible things he has done. There is nothing similar in Rigoletto to hold the duke of Mantua accountable for his abuses. Rigoletto is left to pay all the consequences, not that some of them are not of his own design, and therein lies the tragedy.

For this production, Rigoletto was played by Quinn Kelsey, and he was AMAZING! Not only does he have an amazing voice, but he brought a certain amount of sympathy to the character so that you actually feel bad for him in the end. Because, don't get me wrong, Rigoletto is not a nice guy and really (almost) deserves everything he gets. He would if it was not taken out on Gilda, his innocent daughter, who also suffers at the hand of the duke.

Nino Machaidze (Gilda) and Pene Pati (the duke) are also great. Their only detriment being that they had to perform opposite Kelsey. Actually, this production was full of great performers. And one who rose even above that. Kelsey is already being compared to Pavarotti, and Pavarotti is generally considered the greatest tenor ever to sing opera. I guess we'll see how things go with Kelsey.

Fun fact:
The duke's aria, "La donna e mobile," is one of the most recognizable tunes in opera. Verdi knew what he had when he wrote it, too, and didn't introduce it to the cast and musicians of Rigoletto until hours before the premiere performance of the opera. They were given instructions to not sing, whistle, or even think the melody outside of the theater. The morning after the premier performance, people were singing the aria in the streets.
Posted by Andrew Leon at 12:00 AM