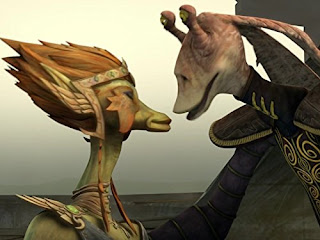 -- Wisdom is born in fools as well as wise men.

Last episode was Temple of Doom; this episode is Raiders. You know the whole thing where Indy chases Nazis (see, Indiana chases hates Nazis! If it's good enough for Indy, it should be good enough for, well, everyone) carrying Marion through the streets while she's yelling his name? Except this time it's cultists carrying Queen Julia while she yells "Jar Jar!" Which is fine as far as it goes, except that it's Jar Jar chasing them because Mace Windu stopped to beat up some cultists.

I have a serious problem with Mace stopping to beat up Nazis. I mean cultists. I don't have a problem with him beating them up, but they were chasing the dudes who had the queen, and Windu had no reason to spend his time on those dudes. He stopped long enough to get split up from Jar Jar which gave the cultists time to get away. But, see, those particular guys were no threat to Binks or Windu, and they could have just bypassed them and retrieved the queen.

Yeah, I know that would have been the end of the episode... except it wouldn't have to be! I mean, Mother Talzin is the big bad in this, so any number of things could have happened! Probably not what did happen, but I hate when a story hinges on a stupid decision someone makes that isn't a decision the person would normally have made. [It's okay for a character to make a stupid decision if it's a stupid character who makes those decisions all the time, but a smart character shouldn't make stupid decisions just to further the plot.]


"Maybe using the Force is taking too long..." (paraphrased)
Posted by Andrew Leon at 12:00 AM