The Gate To Women's Country (a book review post) 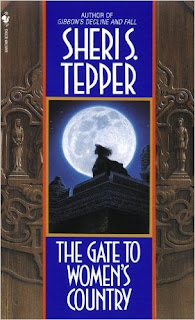 Generally speaking, post-apocalyptic books aren't my thing. Post-apocalyptic stories tend to revolve around one thing: how horrible everything is after the apocalypse. This book is not like that. Refreshingly so.

In fact, I didn't know I was reading something post-apocalyptic at first. Yes, that means I didn't know what the book was about. My wife told me I should read it, and I did, and I did that without reading the back cover blurb or anything. Yeah, I trust my wife that much. Her reading standards are much higher than mine, and mine are already pretty darn high. Basically, if she tells me I'm going to like something, I can believe that that is true.

So, yeah, I started reading it without knowing it was post-apocalyptic, so when I got to the part of the story that revealed it was a future society, not just some alternate or fantasy society, it was really an "oh, wow" moment. And, yes, I do realize I ruined that for any of you who might decide to pick the book up, but, really, how many of you were actually not going to read the back cover? That's what I thought, so get off my case. It's right there on the back, so I'm not spoiling anything!

I'm going to make a comparison, now. Everyone loves Ender's Game because they were caught off guard by the ending. Everyone is always, "Oh, wow! I didn't see that coming!" But not me. Not only did I figure out what was going on before the reveal, I knew what was going on almost as soon as it started happening. I liked the book, but there was nothing surprising about the ending to me, and, what's more, at the time I read it, I didn't know the ending was supposed to be a twist. It just seemed the natural outcome to me. I was surprised to find out that other people were surprised by the ending.

The Gate To Women's Country was more like The Sixth Sense in that regard for me. All of the clues as to what is actually going on in that movie are right there in the movie, but you don't see them for what they are. It makes the movie even more brilliant, because you can go back and watch it again and see how all the pieces are laid out and see how you just missed putting them together because you were too caught up in the story. It's rather like missing the forest for the trees.

There is a thing going on in The Gate To Women's Country that's rather brilliant, but what makes it more brilliant is that Tepper lays it all out in front of you -- she basically tells you what's happening -- but you don't see it. I did manage to work it out before the big reveal in the book, but it was rather late, only a few chapters before the reveal, and a definite "oh my God!" moment.

Considering the secret at the center of the novel, a case could be made that this is a dystopian novel. [When I say that, I mean it in the context of the original definition of the word, not the warped view we have of it currently. So, for your cultural edification: The current popular view of "dystopian" amounts to the same as "anti-utopian" or "the opposite of utopian" (which is anything that is not an actual utopian society (so any society currently on Earth (yes, we are all dystopian))). The actual definition of a dystopian society is a society that looks as if it's utopian but has something wrong or flawed at its core. An example would be the society in Brave New World which looks and acts like a utopia except that the population is largely controlled through the use of drugs.] I suppose that depends upon which side of the morally ambiguous question you fall. It's an interesting question, but not one I can go into without spoiling the entire book. But, trust me, I'd love to go into it.

It's a good book. A very good book. It's well written and will probably keep you wondering what it's actually about for quite a while. In a good way. Because you can probably pick up on it not being about what it appears to be about fairly early on. The characters are really good, too, and many of them are not exactly who they appear to be, too, but also in a good way, in the way of getting to know someone, say, away from work when you have only ever known them as a work acquaintance.

The only warning I would give is that the book has a definite feminist slant and, if you can't go in for that, you should probably skip the book; it will probably make you mad. And that, more than anything, will be quite revelatory. If the book makes you mad, it's probably about you.
Posted by Andrew Leon at 12:00 AM