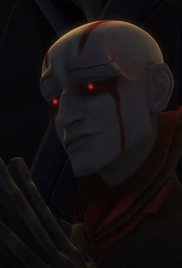 "Is the Dark Side stronger?"
"No! Quicker, easier, more seductive."

In the context of the original trilogy of Star Wars movies, we tend to just accept that Yoda is right. Yoda is always right. And, at one point, he probably was right. Well, definitely, at one point, he was right. The Force was in balance, kept that way through the will of the Father. However, by the time Yoda is stating this to Luke, that the Dark Side is not stronger, the Force is out of balance, and the Dark Side is most definitely in ascendance. The Son has shifted the balance.

There's also what is probably very important stuff with Ahsoka. Definitely foreshadowing. I know that Ahsoka comes back in Rebels, though I'm not that far into it, yet, but I don't know if this has to do with what is going to happen there or if it has to do with anything that's going to happen in the new trilogy [There has been a lot of speculation and rumors about Ahsoka appearing in the episode eight or nine.] or if it's just a plot line that got left blowing in the wind due to Disney dropping Clone Wars. Whether it comes back or not is immaterial, I suppose, considering it's good stuff in this episode.

All of this is also a direct repercussion of Anakin turning down his role as the Chosen One. In the typical story of this nature, the "chosen one" character ends up being compelled in some way to take up the role, but, as we saw last episode, Anakin refused to be the guy to maintain the balance in the Force. Which begs the question, "Is he still the Chosen One?" Does what happens later in both Revenge of the Sith and Return of the Jedi come out of his status as Chosen One or is it because of his refusing to be that person?

I hope in some way Star Wars addresses what happens in this trilogy arc.
Posted by Andrew Leon at 12:00 AM