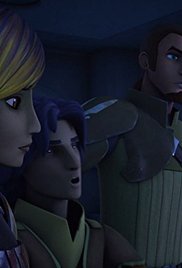 Empire Day is exactly what it sounds like, the equivalent of Independence Day. Except I guess you could call this Loss-of-Independence Day. As it turns out, it's also Ezra's birthday. Yeah, not a good day for Ezra since, as it turns out, the Empire is responsible for whatever happened to Ezra's parents. Ezra's parents who ran an underground radio speaking out against the Empire.

The episode centers around the unveiling of the new TIE Fighter Advance during the Empire Day celebrations on the planet Lothal, Ezra's home planet. Kanan and crew have special plans for the new ship. But there's a Rodian on the loose, and the Empire is after him. Of course, the crew of The Ghost end up involved. As does the Inquisitor.

This is actually a two-part episode, so I'm reserving judgement until I watch the next one but, so far, this is an interesting story. I do realize that I might have sounded complainy in my review of the previous episode in dealing with the back stories of the male characters, but I'm not complaining about back story, just the lack of it for the female characters. Ezra, though, as the protagonist, should have a more full back story. Basically, I'm all for more and more inclusive back-story telling.
Posted by Andrew Leon at 12:00 AM