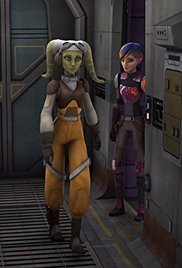 I was going to say, at some point you have to start revealing the back stories of the supporting characters, then I realized they've revealed the major points already on the male characters. Sure, it's only episode six, but they gave us the stories for each of the male characters by the end of the second episode.

1. Ezra: The protagonist. Orphan boy with special powers. Fantasy cliche hero. Same model as Luke, actually. And Anakin. And Harry Potter. You get the picture, I'm sure.

2. Kanan Jarrus: Jedi on the run from the Empire and trying to do it harm at the same time. Sure, we don't know everything about him, but that's really enough to place him in the spectrum of things. He's the mentor character. Flawed, but the best available.

3. Zeb: The strong man. One of the last survivors of his race. The Chewbacca replacement, down to the part where his race was exploited and killed by the Empire.

We get all of that in the first two episodes with nothing about the women other than that Hera owns The Ghost and is the pilot, and Sabine wears some pieces of Mandalorian armor.

We get to find out a tiny bit about Sabine in this episode. She was a loyal Imperial in the Academy on Mandalore, blindingly following orders... until something bad happened. Now, she has trust issues and hates it that Kanan and Hera keep her in the dark about things. The whole episode is an exploration of trust between Hera and Sabine.

There is some fighting of monsters, too.

And the repeated referring to someone called Fulcrum.

But, overall, this episode was back down into the "kids' cartoon" realm for me as the fight with the monsters had a very video game feel with even the characters referring to the combat as "wave one" and "wave two" and so on. So I'm back to waiting to see where the show goes after the brief moment of hoping that it was rising about merely being a cartoon for kids.
Posted by Andrew Leon at 12:00 AM