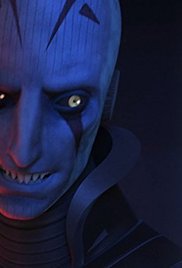 "Make it your specialty and make it fast or this ship becomes a real ghost!"

The Inquisitor is hot on the heels of the crew of the Ghost chasing after a cybernetically enhanced rodian who has inadvertently stolen Imperial plans. At least, that's who he's supposed to be chasing, because the information the rodian is carrying is significant: blue prints for top secret weapons, deployment schedules, what the Emperor eats for breakfast. Okay, so I'm kidding on that last bit; it's what the Inquisitor eats for breakfast. Fine, still kidding. It's important stuff, though, and the Empire wants it back.

The situation is complicated by the fact that Tseebo, the rodian, and Ezra have a history, one Ezra is not prepared to forgive. Then there's the fact that, no matter how important the information Tseebo has is, the Inquisitor is more interested in bringing down Kanan and his Padawan. Kanan uses that to his advantage which, of course, puts him and Ezra into harms way.

A was not completely happy with the episode "Out of Darkness," as I said in that review a couple of weeks ago. This episode somewhat redeems that one by bringing elements of that episode back into the plot. "Gathering Forces" reaches back and elevates what felt like a mostly disposable episode at the time by giving it a larger purpose in the scheme of things. That's the kind of thing I like in story telling, where things that seem insignificant at the time return later and show their importance. Not that this is incredibly significant, but it's enough so to make it interesting.

So the show has bounced back up in my estimation, especially with the conclusion of this episode, showing that things are going to be a bit more complex than what is normal for just a kids' show.
Posted by Andrew Leon at 12:00 AM