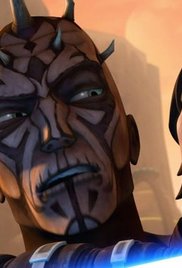 -- The path to evil may bring great power, but not loyalty.

The Jedi Council discover that it is a kin of Darth Maul's who has murdered two Jedi at one of their outposts. Not just the two Jedi, either, but wiped out the whole outpost. Considering his connection to Maul, they send Kenobi to investigate. He takes Anakin with him, which, actually, was probably a really good idea.

One of the things that has begun to bother me a little is how quickly characters gain mastery over the force these days. It's not that I don't understand the expediency of it; I mean, they want these characters to be able to pose a threat to the heroes, but it still bothers me. It hasn't really happened in Clone Wars before this, but Savage attains his power and some (enough) control very quickly. Basically, we get a brief training scene where he learns to harness his hatred, and he's a match for Anakin and Obi-Wan at the same time.
[A similar kind of thing happened in the most recent episode of Rebels I watched. And it's one of the things I have an issue with in The Force Awakens.]

And, well, I'd like to say more than that, but you should really just watch it.

"So much for not starting something."