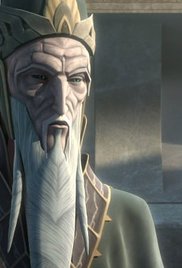 -- Balance is found in the one who faces his guilt.


Other than that the Force exists, Star Wars doesn't often stray into the realm of metaphysics, even when dealing with Jedi training. There are moments, as with Yoda's speech in The Empire Strikes Back:


For my ally is the Force, and a powerful ally it is. Life creates it, makes it grow. Its energy surrounds us and binds us. Luminous beings are we, not this crude matter. You must feel the Force around you. Here. Between you, me, the tree, the rock, everywhere! Yes, even between the land and the ship.

Then Yoda lifts Luke's x-wing out of the swamp to prove his point. But, on the whole, the show tends to take a much more Han Solo view of the Force.

"Overlords," though, firmly steps into the realm of metaphysics and deals very directly with aspects of the Force that we've never seen before. And, other than this story arc, may never see again. Considering that The Clone Wars is canon, it makes me wonder how the events here relate to what's going on in The Force Awakens, because it almost has to relate. [Except for the fact that Abrams probably didn't see these episodes or do any research into what he was talking about or what he meant when Snoke said, "There has been an awakening in the Force." We just have to hope that other people who know more about what's going on were paying attention and keeping things on track.]

More than any other story arc in The Clone Wars, I think this one is a must see. Whether you enjoy the story or not, if you're a fan of Star Wars, this is essential viewing.
Personally, this is my favorite arc from the whole series. I wish they had delved more into this story and these characters.
Posted by Andrew Leon at 12:00 AM