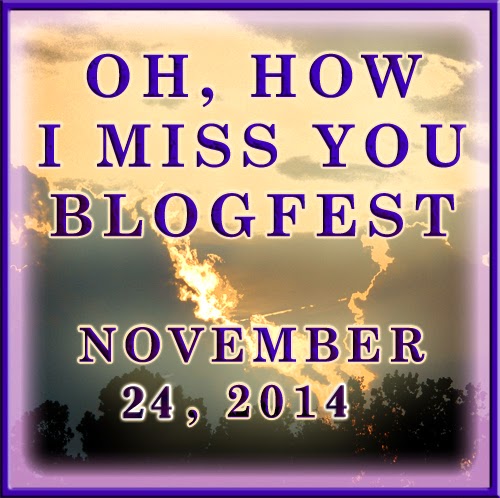 In truth, I don't really have a lot to add to what I said in 2012 and 2013. I don't have any new people/blogs to add to those lists, and I figure if you want to see who I talked about before, since they are still the same, you can click the links and go back and look.

However, I do want to highlight one blog in particular that I miss, because it's not coming back.

A few months ago, we lost Tina Downey of Life Is Good. She was having some health issues, but she didn't really let on as to how serious they were, so it came as quite a shock to pretty much everyone who knew her online, I think, when she died. We weren't expecting it, and we weren't prepared. Not that you can ever really be prepared for anyone's death other than your own. I listed Tina last year in my "blogs I would miss" section of this blogfest and, now that she's gone, I do miss her. I miss her joyous outlook that she held to despite her health problems. I miss her posts about what it was like to adjust to moving to the United States. I miss arguing with her about math. I miss her comments.

I think, considering her last post was within a week of her death, that she probably misses blogging. She had no intention to quit. It's too bad the world wide web is still only the world wide. I'm sure that once we figure out how to go beyond, we'll find that she's out there somewhere still blogging away, and we'll have tons of posts to catch up on.

This blogfest has been brought to you by Andrew Leon (that's me), Alex Cavanaugh, and Matthew MacNish. You can find the other participants on the list below: