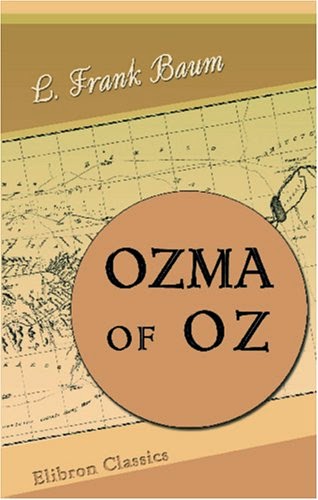 Because The Woggle-Bug Book, is not included as one of the Oz books, Ozma of Oz is considered the third book in the series. Despite the fact that the book is not really about Ozma (introduced in The Marvelous Land of Oz), it gets her name. She doesn't even show up until more than 1/3 into it and hardly takes center-stage after that. The title, though, is probably the greatest weakness of the book. So far, I'm enjoying each of these more than the previous one. Being only three books in, though, that's not saying much.

In a broad, cultural sense, Ozma of Oz may be the most significant of the Oz books. It introduces the character Tiktok, who is considered by many to be the first use of a robot in literature. An actual mechanical person with a mechanical brain. He's a clockwork, as the name implies, and you have to wind him up, but, unlike the Tin Man, he is completely manufactured and his knowledge was "programmed." Of course, we don't really know what that means, but it doesn't really matter. Within the structure of the book, he is just another of Baum's interesting and entertaining characters, winding down at inopportune times.

My favorite of the new characters in this book is the Princess Langwidere. The princess owns only one dress, a white one, because it goes with all of her heads, all the 30 of them. Rather than change clothes to make herself attractive, she changes heads. The white dress is because it goes with whatever head she chooses to wear. This, of course, rather confuses her subjects, because they can't figure out why she looks different every time they see her. Each head also has its own personality so, although she retains her memories, some heads are more likable than others, and she can feel bad in one head about what she did while wearing another. This whole idea is a great concept, and I wish I'd thought of it.

I should mention that this book features the return, by popular demand, of both Dorothy and the Cowardly Lion.

Now, rather than talk anymore about the story, clever as it is, I want to discuss some social issues and commentary that are worth noting.

There are no men in these books. Not really. The only real example of a man that you get is that of the Wizard in the first book, and he's a fraud. Although the Tin Man used to be a man, he is no longer. All that's left is a rather vain and pompous facsimile. Fortunately, he's also genuinely caring, or he would be insufferable. The other male personas among the main characters are just that: personas. They don't represent actual people but ideas. Then there are the soldiers in Ozma of Oz, who are rather comedic as they are all but one officers. The lone private is only there so that the others have someone to give orders to. He's also the only one who doesn't run away from danger, although the officers were supposedly chosen for their bravery.

All of the important characters in the books are women, and most of them are positive examples of powerful women, Princess Langwidere being a prominent exception. She was more interested in admiring her various heads in the mirror rather than ruling the kingdom which she was responsible for. Considering that these were written before women had the right to vote, I think this is an important aspect of the Oz books to acknowledge.

That said, we do run across Jinjur, who had been a general in the previous Oz book, who is now married and settled down. Dorothy is amazed by the change but, as Jinjur says, "I've married a man who owns nine cows and now I am happy and contented and willing to lead a quiet life and mind my own business." So, despite the fact that Baum supports the independence and power of women, there does still seem to be the underlying belief that all a woman needs is to find the right man to marry and she will settle down and give up all that other stuff. It does seem, though, that Jinjur wears the pants in her marriage; her husband is indoors nursing the black eye that she gave him for not following directions. I think, though, all things considered, we can forgive Baum this one slip. At least in these first three books, Oz gives us a powerful representation of what independent women can do.
Posted by Andrew Leon at 12:00 AM