Let Me Incite You

See, the problem there is the word "action." We all have this Idea of what Action is, and it involves car chases and shootouts and smashing and crashing and all of that just like at the beginning of the movie The Goonies, which is rather brilliant, actually, in putting all of that in there and making it mean something without actually skipping... oh, wait, I think I'm jumping ahead. At any rate, what people think when they read that about "starting in the middle of the action" is "starting in the middle of the Action," and that's not what that means.

For those of you that don't know, I've been teaching creative writing for a few years at my kids' (well, now, "kid's," since there's only one left at the school) middle school. One of the things that I have to talk about every year -- and not just every year but multiple times every year -- is where the kids should begin their stories, how it starts. About half of the short stories I get start with the protagonist (almost always a middle schooler) waking up, getting dressed, brushing her teeth (the teeth brushing is always included, which is good, you know, because I'd say that probably means the authors are brushing their teeth, too, but I do, also, find it curious), eating breakfast, and going off to school. I equate this with standing in line, a long one, for a roller coaster at an amusement park. Lines are boring and pretty much the same no matter where you're standing in it, at an amusement park or at the bank or in a grocery store. And most everyone does the same kinds of things when they get up in the morning, and we don't want to read about it.

The thing is, the line is not part of the roller coaster. It is not "the action." 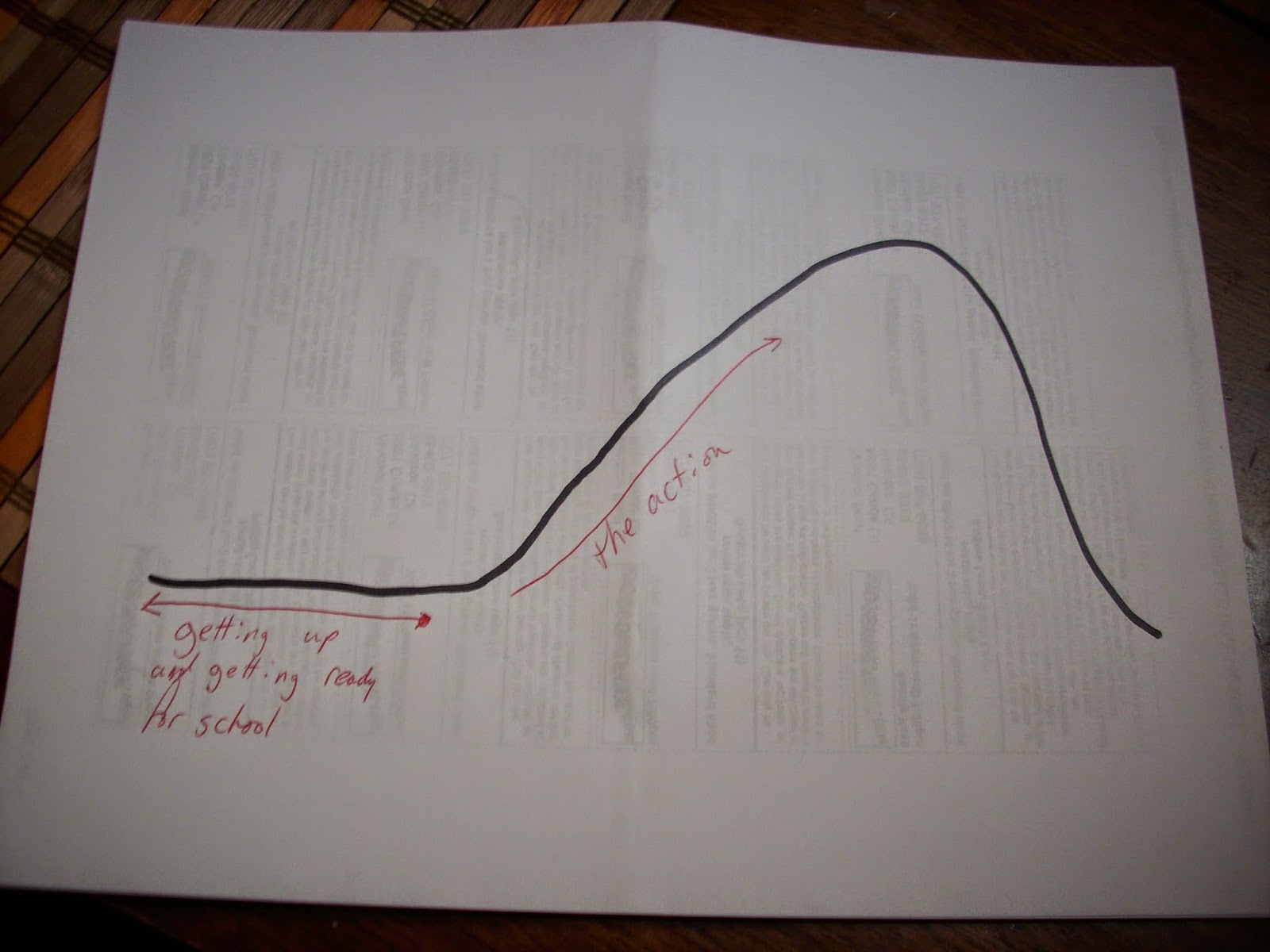 The action starts somewhere around the curve going up. How much before is, yes, subjective and probably depends upon the kind of story it is, but I'd say it's the part of the line where you're actually on the ride itself or, maybe, when you're in the little herding areas being sent along to the meat processing... oh, wait! Roller coaster... right! ...being sent along to the specific part of the ride where you're going to sit or to the specific car (or boat or whatever) that you're going to be in.

Those of you who pay a little more attention may have noticed a red line through the action in the middle of the exposition: That line is called the "inciting incident." 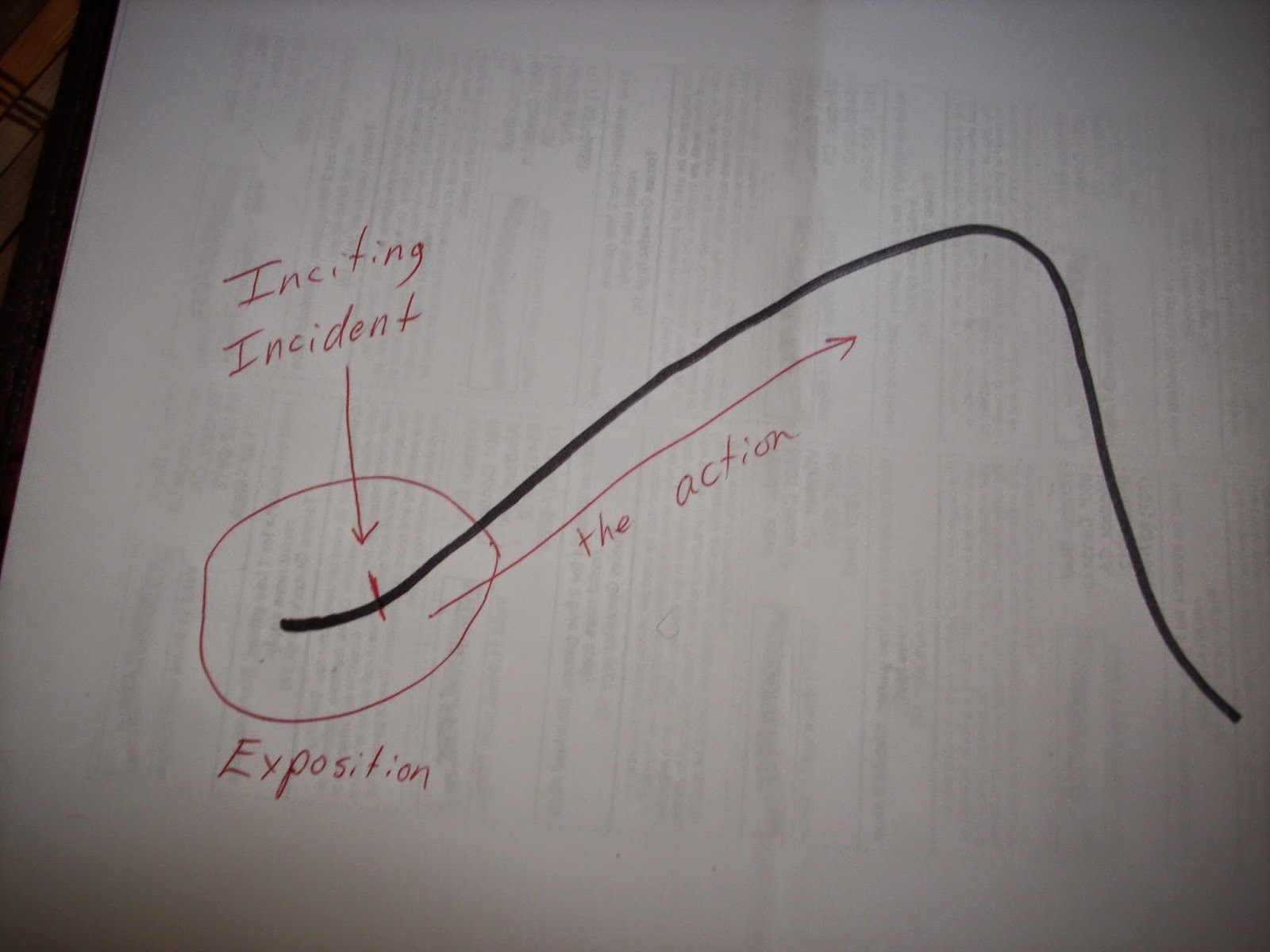 The inciting incident is the moment in the story where the protagonist's life is sent off in a different direction. We also call this the "point of change." The exposition should be centered around this event, thus you are starting in the middle of the action, not somewhere back in the boring, mundane stuff that makes up everyone's life. Like getting up every morning and getting ready for school or work.

I most frequently use Star Wars (specifically A New Hope) to illustrate this (because it is the most common denominator among the students. Always. Even more than Harry Potter). The action starts with Luke buying the droids, his inciting incident, the point where his life changed (and, yes, I know that's not where the movie starts. That stuff up in space with Leia and the droids is prologue). That moment, the purchase of the droids, is not Action. It is, however, in the middle of the action.

Another curious thing about my middle schoolers: The most common inciting incident is the protagonist receiving a mysterious note or book.

The point is that "starting in the middle of the action" does not mean, necessarily, starting with something exciting, starting with Action. It just means finding that point in which your protagonist's life changes, where it veers off course. That can be a very boring thing, in all actuality. Like buying a pair of droids or finding a mysterious note or a birthday party. Not everything has to be explosions and gun fights.

All of which leads me to what had me thinking about "inciting incidents" in the first place, other than that's what we're working on in class, right now. The thought was something like, "If someone was making a biopic of your life, what would your inciting incident be?" I mean, there's no need to cover anyone's whole life in one story, right, so, if you were looking for the most significant moment, the moment of change, what would it be? Sure, that can be a lot of different things depending on the story you want to tell, but, let's say, it's about, for me, being a writer. That inciting incident is not one of Action. It was just a quiet moment where I read something (I talked about it way back here if you want to read about it), but it changed me.

Anyway... That was just a stray thought that prompted all of this, but I do think it's important to not skip the exposition and to know what your inciting incident is. If you're a writer, that is. Or if you're not, depending upon how you want to take this. Maybe you've never had an inciting incident in your life and you need one? Sometimes, all it takes is a decision.
Posted by Andrew Leon at 12:00 AM