Exploring Personality: A Reiteration (and a Preface)

Because there seems to be some confusion on this point, let me go back over the basis of the Enneagram again.

As a personality system, the Enneagram deals with primary motivations not behaviors. It is different from other personality profiling systems in that, because virtually every other personality system out there is based off of the Myers-Briggs to some extent, and it is a behavior based system. Yes, behaviors can change, especially over time and with maturity. That means that you may test differently on the Myers-Briggs at 40 than you did at 20. So, although the Enneagram looks at behaviors, it is not looking for behaviors, and that is a huge difference. Your primary internal motivation almost never changes. Seriously. And, no, you can't have more than one primary motivation (which is also why I hate "favorites" lists that have dozens of items on them). With the Enneagram, because it is looking past the behaviors to see what is driving them, people virtually always test the same at 40 as they did at 18. It is very rare (very) that someone's Enneagram type changes, and, if it does, it's usually because they suffered some sort of traumatic event.

Now, this does not mean that you might not get different results on an online test even from week to week, but that's because online tests are generally not very comprehensive. People want to sit down and do the thing in less than 10 minutes, so those things tend to be not very comprehensive. Added to that is the fact that people are often not very honest even with themselves or they might feel differently one day than they did the day before. A cursory 10-minute test is not going to catch those kinds of fluctuations.

However, having worked with the actual tests (the ones that take hours to complete because they have hundreds of questions) and having worked with experts who do this stuff for a living, I can speak for the veracity of the system as a whole. It's possible that personality type is fluid when you're a kid but, by the time you've made it through adolescence, your type is pretty much set. You have a primary motivation that directs the way you interact with the world. It may assert itself in different types of behaviors, mostly based upon your emotional state, but the same motivation is behind it.

And that is why this stuff works so well when developing characters for books. For making your characters believable. If you know what the motivations are for your characters, you can make them behave in believable ways. Nothing kills a book quicker than characters doing things that are, well, out of character. As I said before, "Stupidity is not the same as personality," and having a character make a stupid choice to move the plot along doesn't mean that it's a choice the character would have made. When the audience responds, "He would never have done that!" you know you've done something wrong. When they see the stupid choice coming, though, and fear it, you know you've done it right because, then, the readers are seeing the personality and the motivations of the character.

At any rate, I would suggest that you take the test, not necessarily so that you'll know what type you are, just so that you can see how it works. If you do want to know for yourself, though, be honest with your answers. I left a link to the test back in this post. If you take it, let me know what you are.

Now, on to other things! Other thing, Here's your introduction to the next triad of personality types. 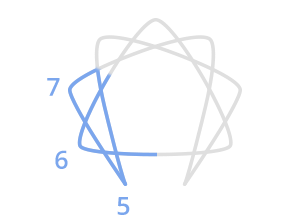 Enneagram types 5, 6, and 7 make up the intellectual triad of the Enneagram. These types are data based. They are information gatherers. They tend to react to situations from a more rational viewpoint, especially when compared to the emotional triad (types 2, 3, and 4). Where other types, when asked why they did something, may say, "I don't know," the intellectuals can almost always tell you exactly why they made the decision they made and hand you the numbers to back it up. Their emotional center is fear; gathering information and making informed decisions is a way of combating that fear. The intellectuals are also attracted to ideas and ideals; relationships are less important and can sometimes be means of achieving other objectives.
Posted by Andrew Leon at 12:00 AM