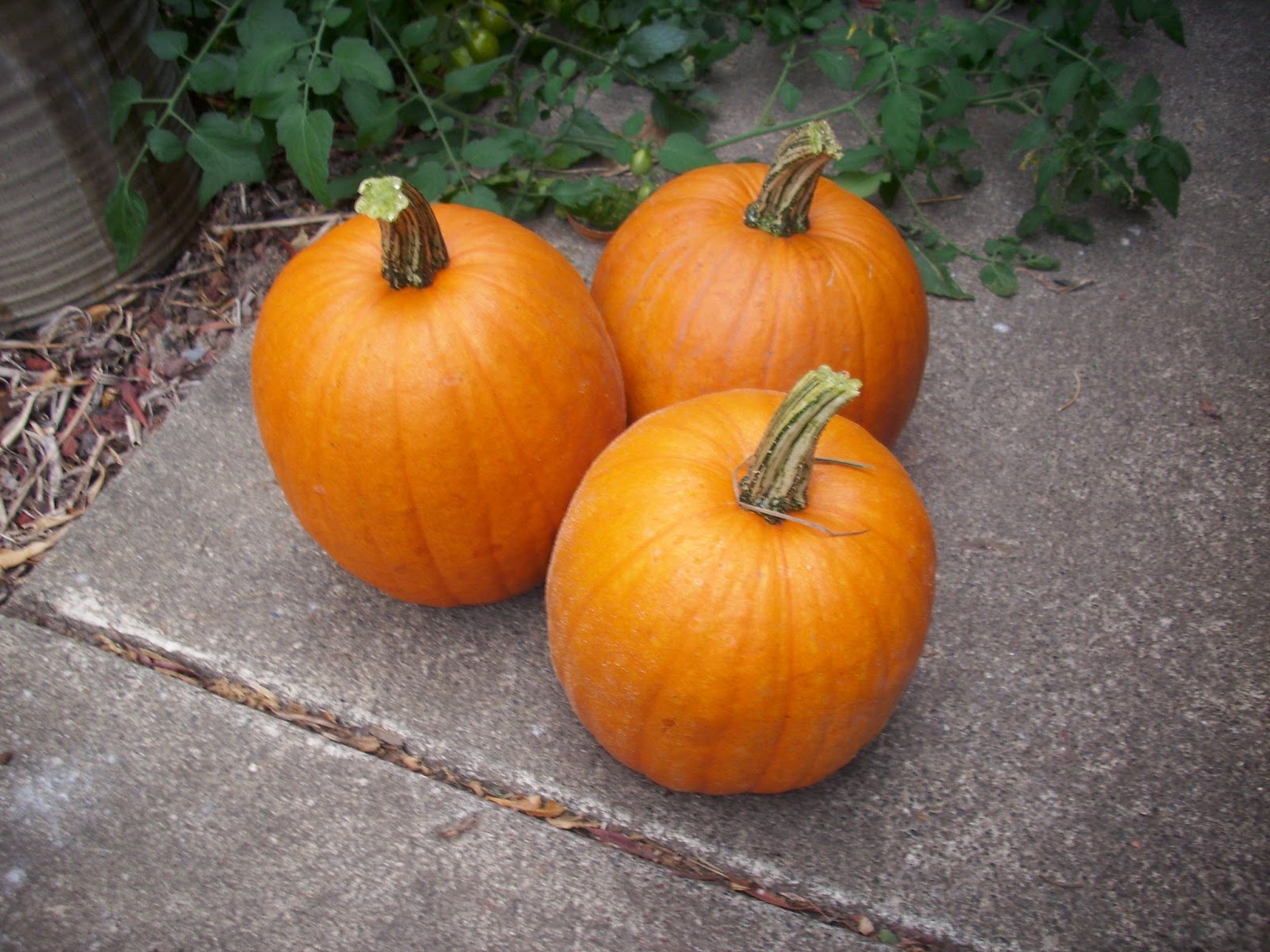 Last IWSG, I was talking about how late it was that we planted our garden this year. And it was. Very late. You can go read about that here.

As late it was planted, though, it is doing very well, now. Sure, we didn't get things like tomatoes as early as everyone else, but we're getting them faster than we can eat them, now. In fact, it's time to start making and freezing sauce.

The above picture is the first three pumpkins to come off the vines. There are three more I'm going to get soon (in fact, by the time this posts, I will probably already have gotten them). AND the vines have suddenly put out all kinds of new growth, so there may be more pumpkins next month! Or early November. And here, that's a totally doable thing, because they're not going to freeze. 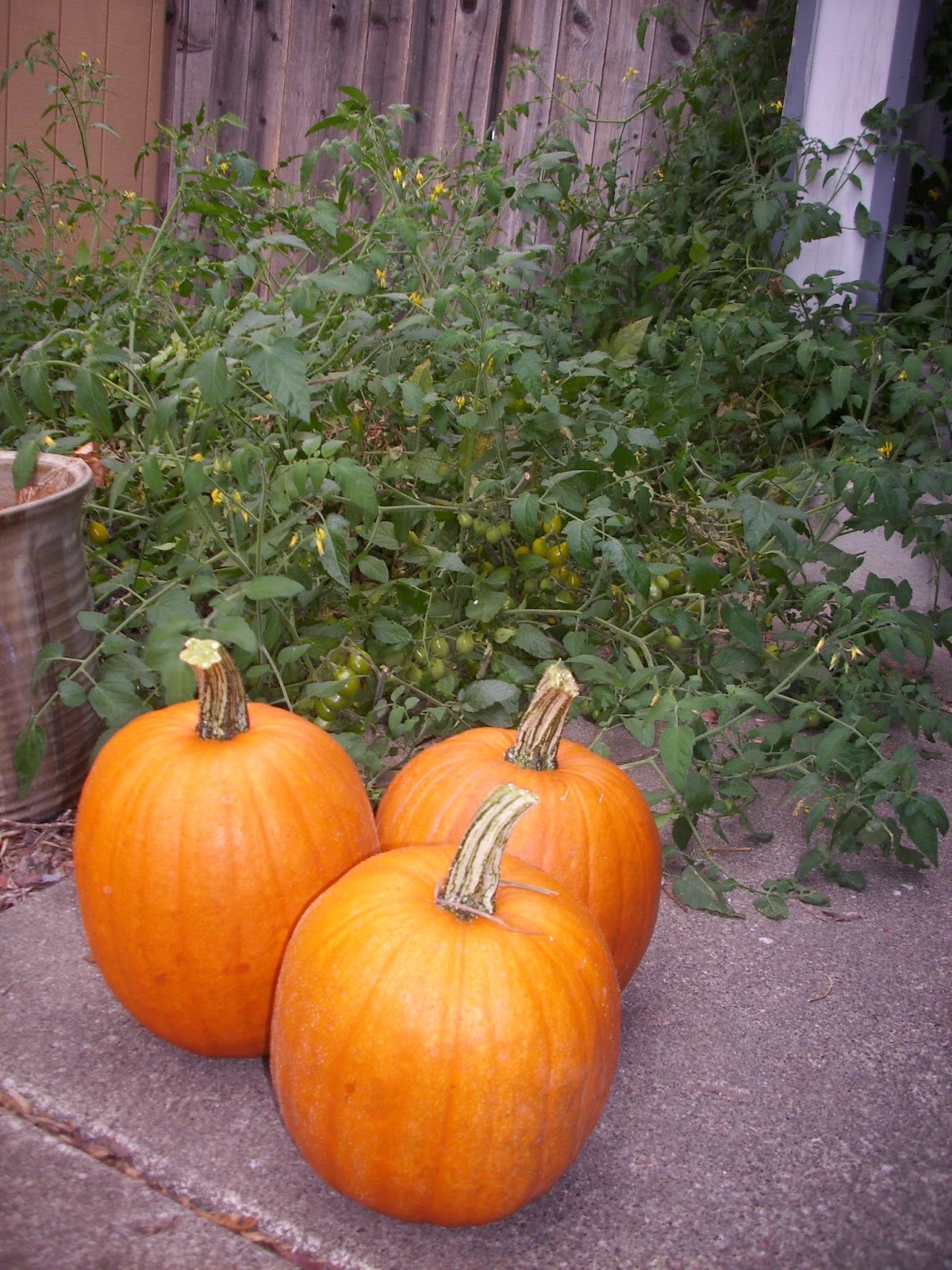 The picture above, still showing the pumpkins, also shows "the monster." Or, shall I say, "the attack of the killer tomato vine." [My kids totally accused me of making it up when I told them about the movie Attack of the Killer Tomatoes!] Let me just make it perfectly clear: We did not plant this particular tomato vine. It grew there all on its own. 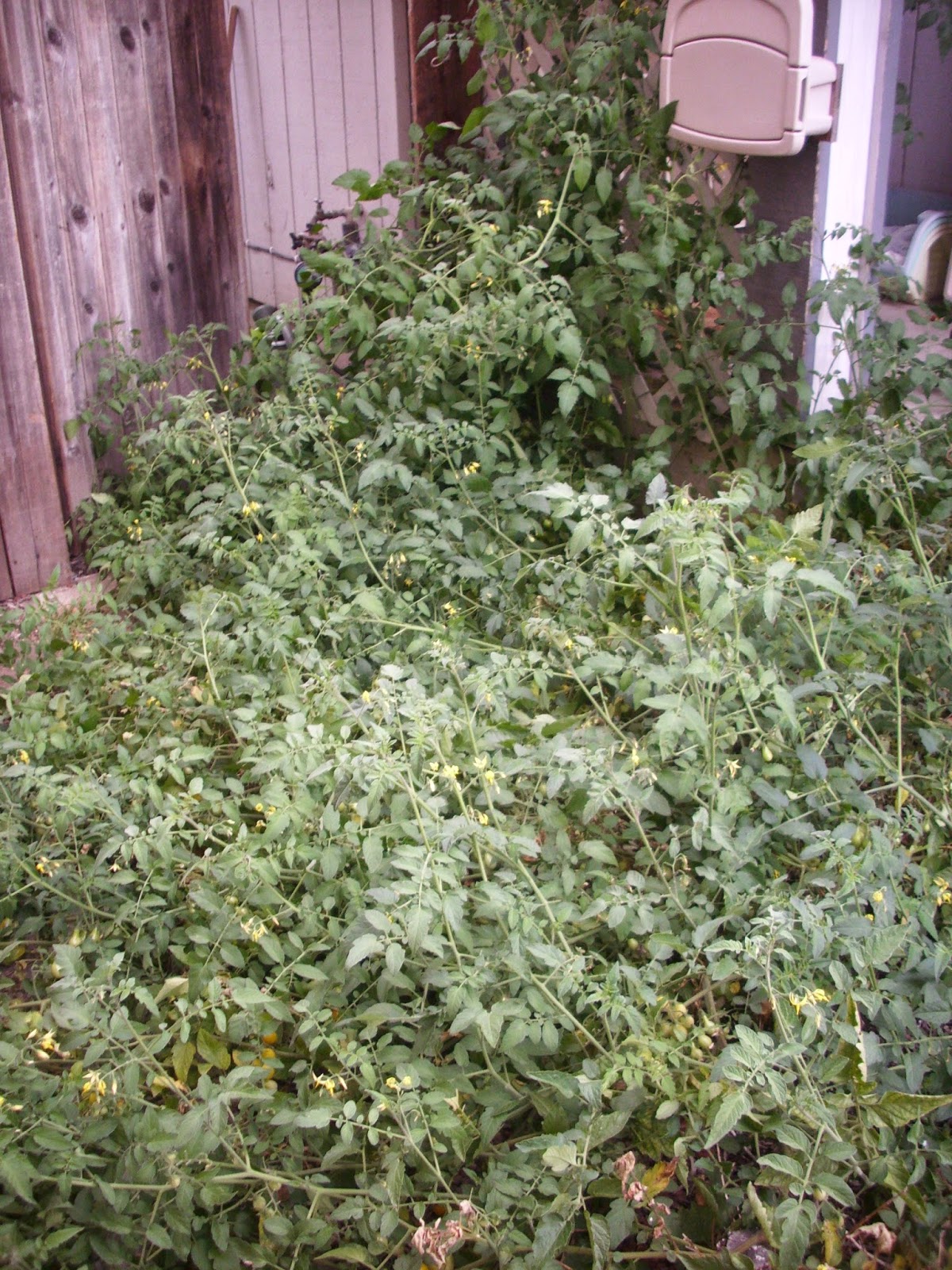 You can't really see the placement of the vine in the picture, but it's right next to the front door of our house. Back behind the "the monster" is the gate to the backyard. My daughter hates this tomato plant, because it keeps growing over the sidewalk leading to the front door (no matter how often I cut it back), and it has grown up and through the lattice by the front door, so it attacks people is they go in and out of our house.

Now, I just want to be clear, here. We are in the middle of the worst drought on record in California. I did not water this plant for the entire month of July and most of August. I was hoping that by not watering it, it would, you know, scale itself back. Not grow so crazily. But it did grow crazily even without the water and, today, when I was picking tomatoes, I got as many off of it as I did off of all of other vines, the vines we actually planted and took care of, combined. In fact, I didn't finish picking from it, because I ran out of storage space, so I got an equivalent amount and left A LOT behind. It is The Monster.

When the vine first started growing, my wife wanted me to pull it up. "It's in a bad place; it will never survive; we don't even know what kind of tomato that is." But I didn't see any reason to just pull it up. My idea was to just let it grow and see what happened. Of course, since then, my daughter has been the big advocate for killing it, but my wife doesn't want to do that anymore. Mostly, I think, she is just amazed at it. I know I am. What a huge success from such an unexpected source.

Which is the point. We don't ever really know what's going to take off and be successful and what's, despite our best efforts, just going to sit there going nowhere. Or just piddle along. Or whatever. It's like when you work really hard on something, something you think is great, and show it to someone and he just shrugs at it and says, basically, "So." But, then, you have this other thing that you just threw together and don't think is anything special and someone comes along and really loves it. Really loves it. As in, "This is great!"

So you nurture your ideas and let them grow, even the ones you don't think will go anywhere, because you may just end up with something huge. As I mentioned recently, that is how Teenage Mutant Ninja Turtles started out.

And you may end up with some pumpkins, too. Things that take a lot of work, that look doubtful for a while, but yield a nice prize at the end. By the way, between the beginning of this post and now, I did go out and pull those other three pumpkins. They're in a nice pile on my table, at the moment, and we have big plans for them. It's all a matter of keeping your options open and not closing off ideas just because you don't think they will amount to anything. I mean, "the monster" grew out of rocks, basically in a completely inhospitable environment, with people trampling on it and no water. And, well, my daughter's scared of it because it wants to eat her. That's what she says, anyway.

This post has been brought you in part by the Insecure Writer's Support Group.
Posted by Andrew Leon at 12:00 AM