My Cat Caught a Lizard, and Other Things

I've made no secret, even though I haven't mentioned it in a while, of my antipathy for Windows 8. It's like a book, a horrible-bad book, that your English professor wrote and then made you read as an assignment. But, not just read it, read it over and over again. And it never gets any better, just... you get used to it. But, then, he tells you that he's made it better. You know, major re-writes and edits and all of that, but people start reading it and they tell you it's pretty much just the same. Maybe worse. Definitely not better. You don't bother with the new one.

That's me and Windows 8.1. I haven't known a single person who has said to me, "Oh, yeah, you should definitely switch to 8.1. It's way better." No... Pretty much everyone has told me that it's pretty much the same. A few of said they liked it less. So my computer has been prompting me to "upgrade" to 8.1 for a while, now. Months. Every time it prompted me, I told it "no." Why bother for just more of the same. I am, at least, used to Win8.
I guess it got tired of asking.

The other night, it just up and told me, "Heya, I'm upgrading to Windows 8.1. I can do it right now, or I can do it tomorrow. When do you want that to happen?" What I wanted to tell it was "NO!" but it wouldn't let me. I tried... well, I tried all sorts of things and it wouldn't let me stop the "upgrade" even though my stuff in the "Should I upgrade?" section told me that I could opt out.

Then it told me I needed to backup all of my files, which was fine except that I couldn't. I backed up my document files, but I have all of my photos on the computer, and I didn't have anything to put them all on nor did I have time to do it by the time I realized there was no way to stop the 8.1 installation. Really, I wouldn't have had time to do it without at least a week of notice. I was pretty furious by that point. Sort of a walking rant.

When the computer finally prompted, "I'm going to install Win 8.1, right now," I thought I had beat it by simply turning the computer off... but I was wrong. An hour or so later, the prompt came up again. And I turned the computer off again. But, when I turned it back on, it said, "Screw you! I'm installing this sucker, right now!"

Have I mentioned that I hate computers? Yeah... Kind of like how I hate cars. They should just work. Period. And they should work in the way you want them to work.

All of that and my cat caught a lizard. In the house. It was a western fence lizard 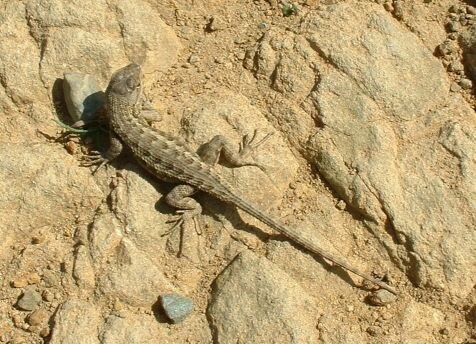 which I think are pretty cool because they're immune to Lyme disease. He was playing with it under the kitchen table, but I didn't pay any attention to him, because that's where he likes to play with pieces of cardboard he pulls off his scratching box or with the little strips off the Netflix envelopes. But he just kept going and going. Usually, he's only good for entertaining himself in that way for 5-10 minutes, but, once he crossed the 20 minute mark, I began to wonder what he was doing. At some point, I checked. He had a lizard. Amazingly, it was intact. Apparently, all he was doing was batting it around and throwing it in the air. However, it was still dead.
It was sad-making.

There was another thing, too, but I can't remember what it was. That's what comes of being interrupted as many times as I have. Always am. Probably, it wasn't important, and this is long enough anyway.
Posted by Andrew Leon at 12:00 AM