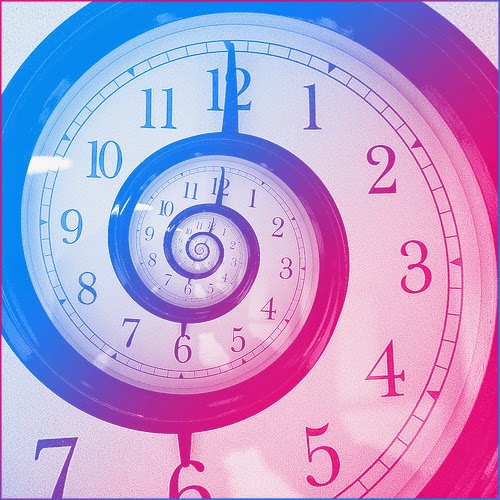 "People assume that time is a straight progression of cause to effect but, actually, from a non-linear, non-subjective viewpoint, it's more like a big ball of wibbly-wobbly, timey-wimey... stuff."

Of course, what I want to do is get all philosophical about time, about how time is finite, about what it would be like to be able to step outside of time... Except I can't really imagine that. My view of time is kind of like a painting. Or, maybe, a movie. Time only exists within the movie and, if you could only step out of it, you could see the whole thing at once, be in any part of it. That kind of thing. Except, conceptually, as soon as I remove myself from the movie, I put myself in another one, because I still imagine a sequence of events and, without time, there can't be a sequence, so it's not something I can properly imagine.

None of that is what I really want to talk about anyway...

Sometimes, there are events that remind us of the finite-ness of time, that there will be an ending. At least, for us. Well, for all of time, but I expect TIME to go on much for much longer than I will. At any rate, the sudden departure of Tina Downey of Life Is Good from TIME has served as a reminder. Time is, after all, finite. There's a deadline on the things I want to accomplish in life.

I suppose most people have all sorts of things they want to accomplish and that they all feel like they have plenty of time in which to do it. There's always tomorrow, right? But there's not always tomorrow, and, sometimes, tomorrows quit coming sooner than we think they will.

I know that Tina was writing a book. Mostly, though, I think she was working on the writing skills she would need to really write the book. What it means, though, is that I'll never get to read the book. Neither will you. And, you know, maybe it wouldn't have been any good and, in the scheme of things, it doesn't matter, but, maybe, it would have been life-changing. For me. Or for you. Or for someone. That book that really inspired a life and changed its course.

I have a lot of books like that. Unfinished ones, I mean; I'm not claiming that I'm writing great, life-changing, works of literature. I have PROJECTS! The idea that I could leave TIME with them unfinished... well, it kind of panics me. I don't want to leave things unfinished. Well, I don't want to leave these things unfinished. I'm sure I will always feel that way about whatever projects I have in the works, but other projects are in the future, and I have nothing invested in that stuff yet. These things, these things I have going on now, I know I don't want to leave still in progress. Especially the stuff that relates to The House on the Corner. Too many people ask me when the next when will be finished for me to be okay with just not doing it.

None of this is meant to change the focus from Tina's passing out of TIME, but it was one of the first things I thought of, "I'll never get to read her book." Which, then, has applications for all of us. Not just writers, all people who are doing things. Who have projects of whatever sort. Some of which sit around and sit around and are left abandoned for months or, even, years on end with the thought, "I'll get to it. Sometime." But "sometime" doesn't always come.

So... I am reminded to look at the things I want to do and evaluate them on the basis of what it's okay with me to leave unfinished. Like, I would like to spend time painting, but it won't really bother me if I leave TIME and there are big stack of unpainted miniatures in my garage. It's not like I'm the only one that could paint them. But no one can write the stories that are in my head. Even with notes about them, no one can write them the way I will, so that's the thing I need to get busy with, working on the things that only I can do so that they're not left unfinished should I have to leave.