The Marvelous Land of Oz (a book review post) 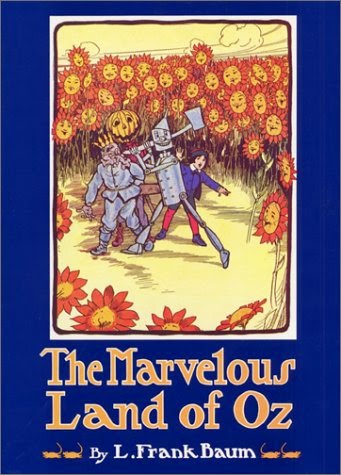 As I mentioned in my review of The Wizard of Oz, I didn't know the Oz books existed when I was  a kid, so I completely missed out on these until I was too old to be interested. Well, as a high-schooler, I wasn't interested. After finishing the second Oz book, The Marvelous Land of Oz, I'm really starting to be disappointed that I missed these books when I was a kid. So far, they are pretty marvelous.

As a writer, one of the things I find most interesting about the series is that there was never supposed to be more than just the one book, the one everyone knows because of the movie. But there was a musical, stage version of Wizard done -- co-produced by Baum -- and the actors portraying the Tin Man and the Scarecrow were so good that people (kids, mostly) began requesting more stories about those two characters. Not about Dorothy, just about the Tin Man and the Scarecrow. The resulting book doesn't even mention the Cowardly Lion.

We also get a book that is much more blatantly about the politics of the day, specifically, the suffrage movement. Virtually every character other than the Tin Man and Scarecrow, which includes all of the "human" characters, are female. Which may be a statement to cause some confusion, considering the main character is a boy named Tip, but you'd have to read the book to understand.

I think I like this one more than Wizard. Well, actually, I do. The one big flaw of Wizard -- that Dorothy wanted to go home, a place she didn't like -- is hard for me to get over. This one has no flaw like that and is even more whimsical. Not to mention that the characters are much more real in this one.

In Wizard, the characters are all "happy happy joy joy" all the time, but that's not the case in Marvelous Land. They bicker. They bicker a lot. Some of them even seem not to like each other much, and the Saw Horse doesn't get along with anyone. Tip constantly threatens the Woggle Bug because of his punning, and Jack Pumpkinhead is... well, I like Jack, but he's a whiner. Most interesting, though, is the Tin Man. He's developed a serious case of vanity and has had himself nickel plated. He's still a nice guy, but he spends more time worrying about his shine than he spends worrying about his friends. Also, I like the contrast between the Woggle Bug, who has lots of knowledge, and the Scarecrow, who has Brains but not lots of facts. It's a bit of intelligence versus wisdom and, mostly, it shows us that we need both.

At the moment, two books in, I'm really enjoying the Oz books and will definitely continue to read them. If you know your history at all -- well, early 20th century history -- there is the added enjoyment of all the social commentary that's been thrown in. Hmm... That sounds haphazard. Weaved in is more like it. In all of the best ways, these books are like the classic Looney Tunes cartoons: Kids find them hilarious, but you can't really appreciate them until you're an adult.
Posted by Andrew Leon at 12:00 AM