What We Can Learn From the Great Comic Storytellers

Comedians were a big part of my childhood. My cousin, the one that ate ketchup, introduced me to a lot of them at an early age. I'm not talking modern stand up comics, either. No, I'm talking classic comedians here like Abbott and Costello, Jerry Clower, and Bill Cosby. Okay, so my cousin really only introduced me to Jerry Clower, but that's significant for reasons I'll get to momentarily.

I grew up watching Abbott and Costello on Saturday mornings. It seems to me that "Who's on First" has always been a part of my life. In fact, when I was in high school, I had partner that I used to perform A&C skits with. "Who's on First" was, of course, our big number, but we had several others as well. It was a lot of fun. But I digress...

My wife and I have been introducing our kids to some of these great comedians recently. Well, Abbott and Costello have always been a thing because "Who's on First" is kind of part of my vocabulary, and I own several collections of their movies. But they hadn't been incredibly interested in my attempts to work in Bill Cosby and others in the past. Something clicked a couple of weeks ago, though, over dinner. I think my wife and I were talking about "the curse," and my younger son started asking questions about it, so we started talking about Cosby, and one thing lead to another which lead to me digging out my VHS (yes, you read that rightly) copy of Bill Cosby: Himself.

[I was about the age of my younger son, 11, when I saw Himself for the first time. It was a Saturday morning, and I was the only one up, and I laughed so hard at the bit about the dentist that I woke up the entire house, and my mom came running downstairs because she thought I was dying or something.]

Despite the protests of my daughter, who wanted to watch Buffy, we spent the evening watching Himself, and all three of them were rolling... well, I was going to say by the end of it, but that's not precisely accurate, because all three of them were rolling well before we got to the dentist. They've been quoting Cosby and singing "Dad is great! Give us the chocolate cake!" ever since then.

All of that lead to this:
"Chicken Heart" is possibly my very favorite Cosby routine, but it's not really a reference you can make and expect anyone to understand. Except, now, my kids, who keep talking about spreading jello on the floor.

So we've been listening to all of these old story-telling comedians, and it's also the start of a new quarter at school, which always means some new kids in my creative writing class, so we always spend the first few class periods going over the plot arc 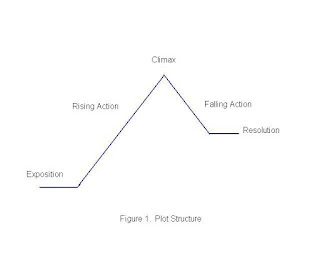 or, as they like to call it, the plot roller coaster (because of my son and the fact that I draw it that way). Probably because of the timing of the two things, I realized how these great stories these comedians used to tell follow the plot arc. It wasn't just guys standing up telling jokes and one-liners.

Let's look at "Chicken Heart." In the first 20 seconds, Cosby sets us up with the exposition: "I'm seven years old [there's our protagonist], and I'm standing up in my crib [and there's our setting]." Also, there's our hook. Seven years old and in a crib? What? It's really quite brilliant. And, then, he expands the exposition while moving into the rising action: "My parents are going out, see." And he just keeps layering and layering on the suspense about what's going on: the invisible black snakes, sneaking out of the crib, the radio. The jello. All the way to the climax, which I'm not going to say, because you should just listen to it. And after all of that, he brings it back down with some falling action and a bit of denouement: "For two years, anyone that would pass by our house..." It's just great story telling.

If you've never heard of Jerry Clower, you should look into him. My cousin had some of his records, and we used to listen to them when I was a kid. Let me just say: it's hard to find this stuff these days. The clip I wanted to include here by Clower is his "Coon Huntin' Story," but I couldn't find the whole thing anywhere. Clower tends more to end on the punchline and skip the falling action and resolution, which is the case in  the clip I am including (ignore the video and just listen to him talk (also, ignore the music crap at the end (I told you, this stuff is hard to find. I had to take what I could get.)), but in the "Coon Huntin' Story," he gives us the whole plot arc, which is why I wanted that one, but I couldn't find part 2. At any rate, this is another of my favorites by Clower, so listen and pay attention to how he sets up the story.

I think this stuff played a much more significant role in the way I learned to tell stories than I realized before now. I mean, I started out, when I was a kid, repeating these stories. It was only later that I found my own, but, when I did find my own, I told them in the same manner as these guys.

Which is the point: I think we can all look at the story telling techniques of these great comedians and learn a lot from them. Things I think we often forget in our fast-paced, modern lives. Even things we're told are unimportant by publishers and television, because they just want us to get right to "it" and skip the set up. Don't skip the set up. That's what makes everything else interesting.

Now, if I've caused anyone to get caught up listening to any of these guys... well, I'm not really sorry.
Posted by Andrew Leon at 11:11 PM