Listopia and "The Clearing"

Goodreads is one of those great resources for writers (and readers) that I have yet to take full advantage of. Mostly, it's a lack of time to really investigate the website. I keep telling myself, "After the next book, after the next book," but I keep adding things to my list of things to do, so it's getting more and more unlikely that I will ever get around to figuring out how to fully put that site to use. I do know two things at the moment:
1. You can add me on Goodreads, which you should do if you're on there. If you're not on there and you read, you should be on there.
2. They have this thing called Listopia that allows you to put books on lists and/or vote for books on lists. This is really good for two things:

The problem, then, is that there are a LOT of lists. I mean, there are really a lot of lists. I've been told by many people that I need to get my books on some lists, but it's one of those tasks where I go over there and look and blink a lot while being overwhelmed by the sheer bulk of the number of lists involved and I can't figure out which list to start with.

However, I did stumble across one list that seems pretty perfect for Shadow Spinner: the list for Best Serial Novel.
So here's the favor I have to ask: If you have read any of Shadow Spinner (you can see all of the parts listed to the right), please go over and vote for it. It would also really help if you could leave a rating for the parts you've read. All of these little things can be a great help to us poor writerly folk.

Oh, and if you really want to help me out, if you see a list that would be good for either Spinner or The House on the Corner (or "Christmas on the Corner"), please feel free to add them to the list and give them a vote. If you let me know that you've added anything to a list, I'll make sure to mention it.

And, now, for the big NEWS of the day, today is the FREE! release of "Part Thirteen: The Clearing"! It will be FREE! today, Monday, January 21, and tomorrow, Tuesday, January 22. 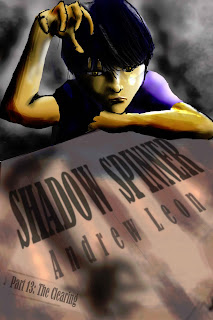 This chapter of Shadow Spinner marks a turning point for Tib, so, if you've been following along, and you should be following along since I give them away for FREE! as often as I can, you'll want to know what's happening since Michael... um, well, just in case you're not quite caught up, I'll not say what happened in part 12.

Speaking of Part Twelve: The Gash in the Floor, it is also FREE! today. Other FREE! parts today are
Part Seven: The Moth and the Shadow
Part Six: The Man with No Eyes
Part Five: The Police Car and
Part Four: The Cop
That's nearly half of the parts available for FREE! this time around.

Also, don't forget about The Great Chocolate Contest! The prize is a box of the absolute best chocolate in the entire world (that I've ever tasted). You don't want to miss out on that!
There might also be an extra special prize added to the chocolate. I should (hopefully) know about that one by the end of the week.

Now, go pick up "The Clearing" and get to reading!
Posted by Andrew Leon at 10:17 PM

Email ThisBlogThis!Share to TwitterShare to FacebookShare to Pinterest
Labels: chocolate, Christmas on the Corner, Goodreads, House on the Corner, listopia, man with no eyes, Part Thirteen: The Clearing, serial, Shadow Spinner, Tib