Nothing Beats a Warm Puppy

I've been talking about my cat a lot, lately. I think that's because it's really an odd thing for me to be attached to a cat. I've never owned one before (unless you count the one we had when I was around four, but we didn't have it for very long, because the neighbors thought it was fun to torture the cat in order to torture me, so we had to get rid of the cat to keep them from escalating to killing it, which, evidently, they told me they were going to do (I was four, and I don't really remember all of that; however, I do remember them tying it to their ceiling fan (on their front porch) and turning it on until the cat flew off)), and I never actually wanted to own one, so all of this with the cat is new to me.

I grew up having dogs, and I feel like I've been neglecting my dog in my blog posts of late in preference to the cat, not that the dog knows this, but it makes me feel bad. After all, nothing beats a warm puppy. 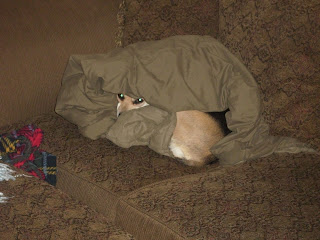 I'm not sure there is anything cuter than that, my little foxy dog. Well, except maybe this: 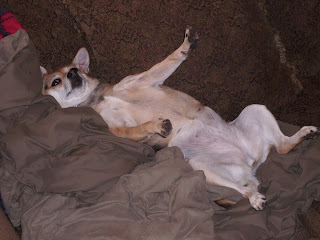 Speaking of warm puppies, we have the Snoopy Ice Skating Arena here where I live, and they have a cafe attached to it: the Warm Puppy Cafe. See, you can't beat a warm puppy! Here's the real proof, though: 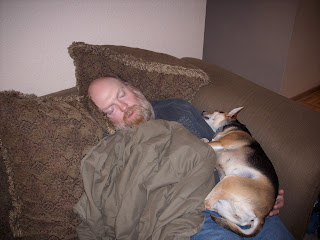 Yeah, that's me after the dog has put me to sleep, because she does that. She's so warm and cozy, if she gets in my lap, she just puts me to sleep. It's like she secretes endorphins right into my brain, and I can't resist. It's a pretty awesome feeling. As close as I'll ever get to what it was like to nap with my kids like this when they were babies, that is until they have grand kids. And as much as I want that, I don't want it for a very long time, so the dog works pretty well in the mean time.

It's been a long time since I've done any of my "Let's Go for a Walk" (with the dog) series, 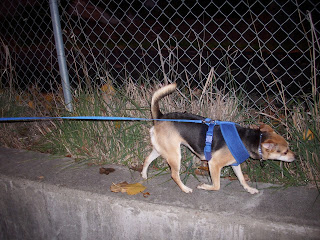 so expect another one of those sometime soon. I still haven't told y'all about the ruins.

So... I love my cat. Man, that is so weird to say. Wait, let me try that again: I love my cat. Yeah, that's weird. I worry about him, because he's out and about during the day. I don't worry about the dog like that. I don't have to, because she's right here with me all day long. Most often, she's curled up in her little bed down by my feet, and I love having her right here. If I want to get some cuddle time in, she's right here, and I can go sit on the couch with her while I try to work out what's happening next to Tib. [Speaking of Tib, the next part of Shadow Spinner, "Part Thirteen: The Clearing," should be out this next Monday, January 21, and it marks a whole new direction for Tib. If you're all the way caught up through part 12 (like you should be), you'll know that something happened at the end of that one, and nothing will be the same after.] So, as much as I love my cat, I love my dog. I want to say I love my dog more, but I think I just love my dog different. She's always here for me.

And, well, even the cat likes the dog, that's why we ended up with the cat to begin with. 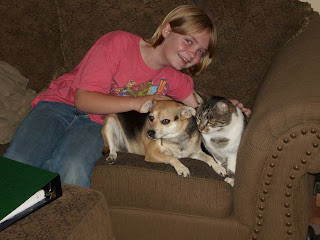 (That's my younger son, who just turned 12 against my will, getting into the picture there.)
Posted by Andrew Leon at 11:19 PM