She's Starting To Damage My Calm, Part 12, and the World's Best Chocolate

My daughter spent most of Christmas break sick. There's nothing worse than being stuck in the house with my daughter while she's sick. The only thing worse is being stuck in the house with her while she's sick when school is actually going on. Most kids don't mind being sick if it means they get to miss school, but my daughter isn't one of those. It's like solitary confinement for her except not, because I'm in there with her.

She did manage to wait until after Christmas day to be sick, so that was something. But, then, she was sick almost until New Year's, recovering just in time to go to a New Year's Eve sleepover, but got sick again the next day and spent the rest of her vacation running a fever around 103-104. It hasn't been fun.

I'd say, "She's starting to damage my calm," but we passed that point a long time ago.

Actually, she did a lot of sleeping, so that part was okay. It didn't get really bad until this past weekend when she started feeling better enough to start complaining about not getting to do things like go outside to play. That's when my calm gets damaged, when I have to listen to "I'm bored" every half hour or so while I try to think of ways to keep her entertained.

I'm so glad school is back on tomorrow and that her fever broke Sunday morning so that she can go back!

I need to regain my calm and get my writing back on!

It's at times like these that I envy those people that need chaos going on around them in order to be able to write. I'm not actually sure why I'm not like that. I went all the way through school doing all of my school work to the TV or the radio (after I gave up TV when I was 15) and often with people around me, including any type of writing I needed to do, but I can't write that way now. >sigh< I pretty much  need silence when I'm writing, so not a lot of that happened during Christmas vacation.

But that's what tomorrow's for (which will be today for most of you as you read this or, maybe, yesterday (aren't the time conundrums of blogs fun!))!

All of that aside, today is the release of Part Twelve of Shadow Spinner! 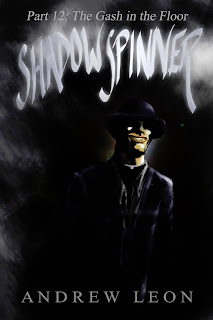 Today is Christmas
All day long
because it  knows these things while, evidently, I don't.)
Also, because I like to do things like this, there will be some other Spinner parts available for FREE! on Monday (all day long):
Part Eleven: The Kiss
Part Six: The Man with No Eyes
Part Five: The Police Car
Part Four: The Cop
Part Three: The Bedroom
Part Two: The Kitchen Table
Part One: The Tunnel
and
The Evil That Men Do

That's a lot of FREE! stuff, so tell all of your friends!

One last note:
We've discovered the best chocolate in the entire world. I'm totally serious. We tried it a few months ago during the Sonoma County Harvest Fair, where it won more rewards than I can remember, but I got a sampler box for my wife for Christmas, and we're absolutely certain at this point. I'm only telling you because I'm considering giving some away as a prize (not because I want you to melt with envy)... as soon as I can think of some kind of contest.
If you'd like to check out their website, you can find them at Recherche du Plaisir. Yeah, you know it's good, because you can't pronounce it.
Posted by Andrew Leon at 10:50 PM

Email ThisBlogThis!Share to TwitterShare to FacebookShare to Pinterest
Labels: chocolate, Christmas, Firefly, Gash in the Floor, Kiss, man with no eyes, Recherche du Plaisir, Shadow Spinner, The Evil That Men Do