Why We Need To Go To Space

As a society, we've given up on space travel. It's not really a part of our cultural consciousness anymore. Not the way it used to be. First, there was the drive to reach the moon, and, once achieved, there was this innate belief that we had only just started. We had, for all intents and purposes, reached the "final frontier."

But, then, we abandoned it. Like, standing on the brink, we shied away. We couldn't take that leap.

Not that I think it's that simple, but, really, it kind of is. The money people looked, and wouldn't make that leap of faith that going out into space would be worth it. At least, it wouldn't be worth it to them, and screw the future, if you know what I mean. But it was that kind of thinking in the 80's (and 90's), the "what are you doing for me now?" thinking, that brought us to where we are. Which is not exactly the best place to be.

My childhood was full of visions and fantasies about what it would be like in space, and there was this expectation among all of us my age that it was going to happen. Not if. When.

Maybe it was the Challenger explosion that caused the change. Or, at least, started the change. At any rate, it's not something that we dream about culturally anymore.

And it's really too bad, because I think we're in sore need of that dream.

It's kind of obvious from a practical standpoint why we're in need of greater space exploration. Just the resources we could get from mining asteroids would be tremendous. Rather than go into all of this, you can just go check out Planetary Resources for all the details.
As an investment, just a simple monetary investment, space is looking really good.

However, I don't think this is where we would find our greatest reward.

For millennia, man explored the world. Man dreamed about the world. Man dreamed about the places he hadn't been. It did something for his spirit. Something unquantifiable. But, then, not all that long ago, we reached the end of the world. There's nowhere left to go. Nowhere to dream about. Not even the oceans or the air for all practical purposes. Not even under the Earth. That unquantifiable thing, that thing that used to inspire men to go and explore, is gone.

There is nowhere to go.

It's hard to say what we've lost as a society because of this, because we don't know which people would be the ones to grow restless and take off into the distance to discover now places. New worlds. Maybe it is that some, at least, of the current societal unrest is due to the fact that people that used to be the ones that would go explore can no longer do that. They have wanderlust that can't be fulfilled.

Like my cat when he wants to go outside. 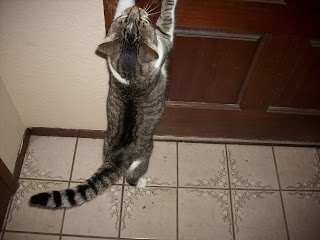 I think we have people like this. Stuck in cities and wanting to get out, clawing at the door, meowing, but no one will let them go. Because there isn't anywhere to go.

Have you ever been stuck inside with a cat that wants to go out? It's much worse, in general, than being stuck inside with a dog. Dogs can (usually) be distracted, not so with cats. Just like with the cat, these people that want "out" need a place to go.
Space is that place...

Which brings me to the other thing we've lost: dreams.

Once upon a time, man wrote about the dreams he had of the places he'd never been. Africa. India. The American Frontier. Under the oceans and up in the sky. Even space. But we've quit writing about those places, because we know what's there. Well, except for space, but, like I said, we've mostly given up on that. And we think we know what's there. Even though we haven't been there, we look through our magic glasses and decide all we need to do is look. Or send a tiny robot.

That, those dreams, and those things people wrote about those dreams, that would be our greatest reward.
Because, when it comes down to it, it's the things that can't be quantified that we live for.
Posted by Andrew Leon at 9:58 PM