I've mentioned before that I used to collect comic books. I've also mentioned that I've worked in comic book retail. One of the things I used to do was place all the comic orders. On one side, that's a pretty easy thing to do: You look at how many copies of, say, X-Men are selling each month, and you order that many copies. On the other side, it's incredibly complicated, because you have to be aware of what's going on in the series or if there is anything special planned so that you can anticipate any spikes in sales. You also have to know how well your back issues on the series are doing so that you can know if you need to order any extra copies to have available as back issues. There is a constant balancing of meeting the current demands of the store vs investing in the future value or hotness of an issue or series. Most comic book stores go out of business due to do over investment. It just doesn't matter if an issue goes from $3 to $30 in two months and you have 100 extra copies in the back if you don't have 100 people lined up to buy those copies. Most comic shops just can't take those kinds of risks.

Unfortunately, I've worked for people that didn't understand that.

At any rate, I was pretty good at picking good investments in comics, especially when it came to new titles, which was the hardest thing to do. That's where a lot of comic shop owners really messed up, too. A lot of them, in order not to miss some new series that makes it big, will order every single #1 issue every single month. Several of them. Just in case. Most of them, though, are just expensive toilet paper, and you spend way more covering your butt than you do off any individual series that makes it big. But, as I said, I was good at picking those, and I never picked a new #1 that wasn't worth looking at. Meaning, I never singled one out and said, "This is one you ought to get. It's going to be good," and ended up wrong.

Which is not to say I didn't have some times when I didn't take my own advice. My biggest regret is not buying this: 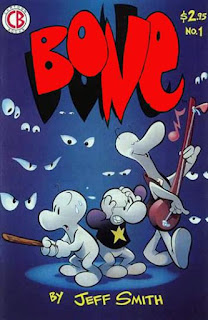 Bone came out at one of those points when I was pretty maxed out on my comic collecting. I'd seen some of Jeff Smith's work previously, though, from when he was doing comic strips in a college paper, and I knew he was good. So it was decision time. To add a new series into what I was collecting, I would have to drop one out, and I couldn't decide on which one to drop, so, reluctantly, I passed on Bone. However, I highly suggested that the owner of the store invest in Bone. The response was, "Why aren't you buying it, then?"

I should have bought it. That issue, 20 years later, is worth $300. The print run was so small that six months later, it was worth $50, and, a year later, $100. I should have bought it, and the store owner should have listened to me. In fact, he told me at the six month point on Bone that he highly regretted not listening to me. But those things happen. By the way, Bone is one of the best comic series I've ever read, and it was, wait for it, self-published. Yessiree, Bob, it was self-published.

That's why some store owners won't pass up #1's, because, unless it's a new X-Men or Batman or something, the print runs tend to be low, so, if it gets really popular, the #1 becomes relatively more valuable than the rest of the series.

And what does that have to do with anything? Well, for one thing, I just like to talk about comic books sometimes. And Bone was self-published. Jeff Smith went over to Image for a while, but he didn't like how that worked out and ended up going back to self-publishing.

However, what that really has to do with is that I just finished Shadow Spinner! Yep! Tiberius is now the star of his very own 50,000 word book! Hopefully, I will have figured out CreateSpace's new system and have it all formatted and stuff tomorrow so that I can order some proof copies. What's the big deal about proof copies? Well, like a comic book #1, they have a really low print run. So to speak. Well, considering that they limit you to only five proofs, it is really low.

And you still might be thinking, "What does this have to do with anything?"

Remember the Great Chocolate Contest and how I mentioned that there might be an extra special prize? Well, there will be an extra special prize. I will also be giving away one signed proof copy of Shadow Spinner as part of the prizes for the winner of the Great Chocolate Contest. Add that to the best chocolate in the entire world (that I've tasted), and you have, like, a no lose situation. I mean, if you win, you can't lose! Wait a minute... Never mind...

Both prizes might not go to the same person, or, then again, they might. It's all going to depend upon the entries and how good they are. However, Briane Pagel, because of his dislike of physical books, is automatically disqualified from winning  the proof copy, so that's good for all of you, because he's been letting it be known that no one else needs to enter since he's intending to win. (That sounds like a challenge to me!) Even if he does win, he can only win the chocolate, which will mean that someone else would get to win the book. Of course, there are all sorts of other things that could end up happening with that, too.

Remember, all short stories are due to me (email would be great) by February 6, the two year anniversary of The House on the Corner (and the 43rd anniversary of me). If you want to post them on your blog, do that, too! Let me know, and I'll link people over to it.

I'll have more info on Shadow Spinner and its current serialization coming up soon.
Posted by Andrew Leon at 10:25 PM