The Big 30-0! and the Great Chocolate Contest!

So... something happened yesterday that I wasn't paying attention to. The problem with this is that I was paying attention to paying attention to it, because I wanted to do something special for it. BUT I thought had more drafts in my draft folder than I actually did, so I didn't realize until after the fact that I had posted my 300th post! In less than two years, which is much better than I thought I would be doing. But there it is! 300 published posts (301 with this one) and a handful of drafts of things in progress (not to mention my handwritten notes for post ideas that got packed away when we moved that I still haven't located). I'm not really sure why 300 seems to be a significant number to me, but it does. I'm think I won't do another one of these until I get to 501, and if anyone gets the reference, please let me know. The 501 is significant.
[Yes, I know that's not much to go on, but it will separate the men from the boys, metaphorically speaking.]

Stepping to the side for a moment, I mentioned recently that I had discovered the best chocolate ever. And I have! This stuff is the BEST chocolate in the world! At least, it's the best chocolate that I've ever tasted, and that's saying something. No, I don't know what it's saying, but I'm sure it is. Look, I like to taste things (be nice!)... I like to try new foods (is that better?), so, when I get the chance, chocolate is one of the things I like to sample. I've tried lots of different types of chocolates over the years, and this stuff is by far the best ever. It's all hand made right here in a store not all that far from my house. The stuff is divine.

Back when I mentioned that I'd discovered this chocolate, I also said that I would try to think of a contest for which the chocolate could be the prize, well, I've done that. Yep, in honor of 300 posts, and in honor of my birthday, which is coming up, and in honor of the birthday of the first edition of The House on the Corner, 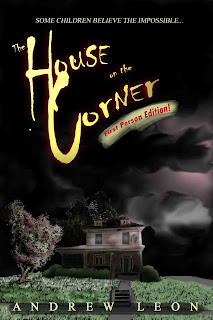 which, quite by accident, turns two on my birthday (the one pictured is the 2nd edition, but that's the one that's available), I have a contest!

To some extent, this contest is a little not fair, but it's my contest, and I AM going to be giving away the best chocolate in the ENTIRE world, so, oh, well, you will just have to deal with it.

So here's the deal:
I have been thinking for a while that it would be fun to do a collection of short stories based on The House on the Corner and the Imagination Room. Those of you that have read the book will understand how that can work. I actually have two already: one that I wrote that is included at the end of the book called "Let Down Your Hair" and one that my son wrote called "Into the Trench" that is included in Charter Shorts. There's so much room for more stories there, though, and I just don't have time, right now, to write any, so, hey, why not get some other people to do that work for me, right? It will be kind of like Tom Sawyer convincing his friends to pay him to do his chores.

And here's how it works:
Write a short story based on a trip in the Imagination Room from The House on the Corner. Submit it to me by February 6, 2013. I'll pick the best one based almost completely on, just, which one I like the best, although I may have my kids help with the choosing if I can't decide. The author of the story I pick as "the best" will win a box of the GREATEST CHOCOLATE in the world. And, maybe, another special prize as well, but I'm not completely certain about the second one yet (but I'll let you know as soon as I am). There may even be more than one prize if there are multiple entries that I think are just awesome. It would be really nice if I had your permission to include your story in a special collection of House short stories as well. Oh, and just to be clear, I want short stories, so that would make your cutoff point 7500 words (though I'm not gonna quibble too much if it goes longer than that (although it would be nice if they were under 10,000 words)).

Yes, I do realize that you have to have read The House on the Corner to be able to enter this, so, if you haven't, you ought to get on that, don't you think? And, no, this is not really a sneaky way to get more sales or reviews or anything like that, although both would be nice. I just think, since quite a few of you (at least 3 or 4), have read it, that this will be a lot of fun. Assuming people actually submit stories. You can even post the stories on your blogs once you write them, and I'll link over to them.
One other note, because so many of my students at school have read the book, I'm gonna open the contest to my creative writing class, too, so you better bring your best, because some of those kids can really write!

Well, there you have it. I hope some of you decide to take part and that this is a fun idea for more than just me. If I'm wrong about that, please let me know. Otherwise, get to writing!
Posted by Andrew Leon at 10:03 PM