Before I start into today's post, Briane Pagel has been working on his short story for the Great Chocolate Contest. He is, of course, serializing it. I'm not sure why exactly I'm saying "of course" other than that, coming from Briane, it feels like an "of course." At any rate, you can read the story up to its current part
here (part 1)
here (part 2)
here (part 3) and
here (part 4).
This is a good example of why I wanted to do this contest. Briane has taken this in such a different direction than I ever would have thought, and that is an "of course." Still, it's like nothing I would have imagined, and I can't wait to see where he's going with it. My favorite thing is Seal Team i. That's just pure genius. [Just in case you don't have the math background to understand why: "i" is the imaginary number used in all sorts of advanced mathematics. Since this is all based on the "Imagination Room," this is an awesome concept.] Also, the story guest stars Rusty, which is just awesome in and of itself. You should go read!

When you have an animal living in your house, you can just expect the occasional... accident. Even from potty trained animals, it's gonna happen at some point or another in all likelihood. Now, don't get me wrong, the dog is pretty good. She never pees in the house, and she only ever poops in the house if her stomach is upset, and she can't get outside. Like in the middle of the night. And I'm not gonna expand on what "upset" means. Let's just say that the last time we had an issue with her was at Christmas when I let her have a bunch of ham scraps, and by ham scraps I mean mostly ham fat. I will never do that again, because her stomach was upset for about two days after that, and, well, no one wants to clean that up.

This last weekend, my daughter had a friend over to spend the night. The dog 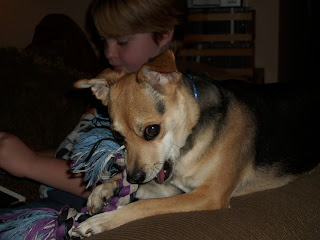 The cat was in my room. That's where the cat has decided he needs to sleep of late. At the end of my bed on either my feet or my wife's. Mostly, this is fine. Except that my daughter is more than a little upset that he, the cat, 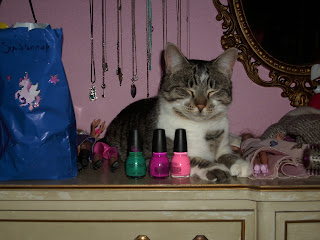 I think he's contemplating painting his claws.
has decided not to sleep with her anymore. But, then, she's kind of dangerous when she sleeps, so I can understand why the cat might want to be somewhere else.

Basically, that night there had only been two living beings in my daughter's room: my daughter and her friend.

The next morning, as I was semi-dozing on the couch with the dog (because I'd had to get up at 6:00am to let the cat out), my daughter came and poked my in the arm and said in a half-dazed voice (because she wasn't completely awake yet), "Dad, there's a poop on my floor." I'm sorry, but pre-7:00am on a Sunday morning is too early to deal with that sh... stuff. Besides, my kids know that they are responsible for any poop left for them as gifts in their rooms. I took care of anything not in their rooms, but they get to deal with the stuff in their rooms. Let's call  it the price you have to pay for having a pet and for having that pet sleep in bed with you. However, it didn't make any sense that there could be poop in her room, because there had been no animals in her room.

In an effort to find out more information, I said, "What kind of poop?" This is a perfectly logical question and has specifically to do with what kind of clean up job the poop will entail. Basically, "is it hard or soft?" which is the framework within which I expected her answer to fall. Instead, she held up her hands indicating the size of the poop. What she was showing me with her hands was... well, much bigger than, say, a twinkie. My dog, my little dog, has never had a poop that got anywhere near the size of a twinkie, and, if she did, I'd immediately take her to the hospital, because something would be terribly wrong with her. I responded with the only thing that made any kind of sense in my brain (poop is too big for the dog, and the dog wasn't in her room anyway), "Maybe <her friend> pooped in your room?"

No, it probably wasn't the nicest thing to say, but, when you rule out the impossible, whatever is left, however improbable, must be true. Right? Besides, I've known kids to do much, much worse.

The comment did not amuse my daughter. At all. She sort of stomped away down the hall. I didn't get up. Poop on her floor is her job to clean up. And I was still busy trying to figure out how there could be poop on her floor anyway. And I still wasn't completely conscious. The dog was warm and cozifying, and I just didn't feel like moving. Yes, her friend was asleep through all of this.

I think my daughter really was, too.

A couple of minutes later, she came back, stopped next to me and said very flatly, "It was a sock," and walked away.

And that is the kind of thing that makes me, as a writer, glad I have kids, because there is no way I would ever have thought of anything like that on my own. Seriously, Alex, all writers need kids just as a source of material. They have a genius that adults can never find, and they don't even mean to do it. Don't be surprised if something like this shows up in something I someday write.
Posted by Andrew Leon at 10:39 PM