The Art of Scapegoating and of Being Scapegoated 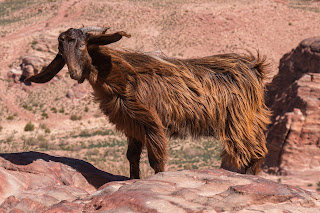 Image by Heidelbergerin from Pixabay

I'm assuming most of you know what a scapegoat is, even if you don't know the origin of the term. That's not really important, and you can look it up if you want to know.
Also, before I go on, I want to call your attention back to this post from something like six years. It's both relevant and important.
[If you went and read that old post, I'm sure you can see how it's relevant to our current political crisis. I want to reiterate that I wrote that well before 2016.]

Let's just assume that you didn't go back and read the post about "The Boss" (since I feel fairly certain that most of you did not) and I'll give a very brief introduction. Very.

There are certain personality types that want to be in charge, completely in charge, with no cost. By "no cost," I mean they don't want any of the responsibility that goes along with being the boss. They just want to be followed blindly and never carry the burden of any mistakes they make. In fact, they are so self-assured of their own "rightness" that they believe they cannot make mistakes and, therefore, if something goes wrong, it must be the fault of someone else. These people are in constant need of scapegoats.

But let me be clear, this is not because there is some conscious thought process that says, "I messed up, but I don't want anyone else to know, so I need to find someone else to blame." It's not like that at all because it never occurs to "the boss" that any mistake may have been his. He just looks for someone who must be at fault because, clearly, someone messed up.

I grew up with one of these types of people, my stepfather, so I am very familiar with how this works. I was, of course, the scapegoat in my house. It was even more fun because the blamelessness extended to my brother, who was his biological son, so any time my brother messed up it was somehow my fault. Here's my favorite story:

I had a mostly unsupervised childhood and I roamed pretty much freely all the time. As long as I was home by dark, no one really questioned where I was or what I was doing. However, on this particular day, I had been to a friend's house and, for whatever reason, I'd actually asked permission to go there. Possibly, it was farther away than I usually went; I don't know. But I had asked my mother if I could go and had permission to make the walk, because I walked everywhere or, later, when I had one, road my bike.

At any rate, when I arrived home, I found that I was in trouble, in trouble for somehow breaking a lamp while I wasn't home. I, of course, responded to the accusation from my father with, "I didn't break it. I wasn't even home." He then accused me of being gone without permission.

And this is where it gets tricky. See, my father knew that my brother had broken the lamp and, yet, he accused me of having done it as soon as I walked in the door. You have to try to follow the process of how this played out.

I said I did have permission because Mom had said I could go.
But that didn't matter because he hadn't said I could go so, therefore, I had not had permission.
It was my fault the lamp had been broken because, if I had been at home, I could have stopped my brother from doing it. Thus, I broke the lamp.
I want to point out that my "father" had been sitting in the chair next to the lamp when it happened.
But, see, it somehow was not my father's responsibility to be keeping an eye on my brother. That was, evidently, my job, a job I had failed to do because I wasn't home. I wasn't more than 10.

This was the way things were during my childhood, and there's not much you can do about it when you're in an insulated situation like that, which is what most households are, insulated little kingdoms.

Don't worry, it gets even more weird.

When I was a teenager, my dad was on of the van drivers at my church. He mostly didn't do any driving for the youth group but, on some trip or other, the guy who usually drove us wasn't available, so my dad was driving. It was a full van of middle and high schoolers all doing what teenagers do when they are in a group together, meaning they were being goofy and making a lot of noise.

Except me. Because that's not what I did. I had a book and was sitting against the window reading and ignoring what was going on. That was my normal.

Maybe this was why my dad never drove the teenagers; he didn't like the noise.
So we're driving along and I suddenly hear my name being yelled angrily. I look up to see my "dad" staring venom and hatred at me through the rear view mirror. Evidently, he had had to yell my name three or four times to get my attention and the only reason it had worked was because everyone else shut up after the second time. Look, I said I was reading, didn't I? And I was focusing really hard on it because of all of the noise and commotion. I don't remember the exact words my "father" used, but it amounted to "Shut the fuck up." No, he didn't curse. We were on a church van, but that's what came through.

Everyone stared at me.
Everyone knew that I hadn't been making any noise.
Not thinking clearly about what was happening, I opened my mouth, "I was rea..."
"I said shut up!"
Everyone looked at my "dad" then looked back at me.
I went back to my book.

Before that happened, everyone had liked my dad and wondered why I didn't care for him. Yeah, that's really about how I felt about him, like he was a type of cookie on a plate of cookies and my response was something like, "No, thank you, I don't care for that one." That's how disassociated I had become from him by the time I was in high school. I mostly just ignored his existence.
Except for those occasions, like this one on the van, where I was forced to acknowledge him in some way.

What I'm saying is that some people have to have someone to blame for their inability to handle situations, whatever those situations are. And I want to be explicitly clear, Trump (#fakepresident) is not ever thinking to himself, "Man, I screwed this up, but I can cover it up by blaming someone else." I think that's what people think about the way he deals with stuff, that his blaming of... whoever... is some sort of conscious deflection. It is not. He just knows that there must be someone to blame and has no concept whatsoever that that someone might be him.

And that, really, is the best way to scapegoat someone. Total belief that the person you are scapegoating must really be at fault. After all, when the Jews sent the scapegoat out into the wilderness, they believed that goat was carrying their sins with it.

When Trump blames WHO for the current state of affairs in regard to the pandemic, he believes WHO is at fault. They must be. Who else it could it be? Oh, China. It's also China. And the media.

These are not lies. Well, they are, but they are not the kind of lies someone makes up in order to change the narrative. It's all self-deception because Trump (#fakepresident) is incapable of looking at the truth. He's actually not smart enough to lie.
It's just like my dad believed it was my fault that my brother broke that lamp. With every fiber of his being, he believed that.

I don't want to say that the pandemic is a good thing in any way, because it's not. People are dying. Lots of people are dying. None of the numbers, especially in the United States, are accurate because there isn't enough testing being done (okay, South Korea's numbers are probably accurate). Why? Because the "president" has been a roadblock to any kind of appropriate response to what is happening. BUT!

But it is good that people -- governors, specifically -- are beginning to ignore Trump (#fakepresident) in order to do what needs to be done. Ignoring these kinds of people, these "bosses," is often the only way to accomplish anything. Or to live peacefully. Or whatever.
Posted by Andrew Leon at 12:00 AM