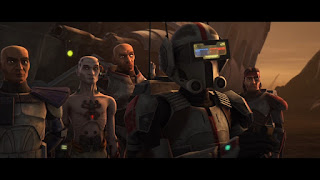 -- Survival is one step on the path to living.


Oh, right! Those funky droids from last episode can fly! The extra gun arms are actually wings and, when they're in the air, they look like pteranodons or something. Very fast, jet fighter-like pteranodons. I suppose having something battle droid sized is good for having droids that can move around inside of buildings when they're not flying, unlike vulture droids. Of course, those are really made for space combat, and these new droids are atmospheric fighters.

Also, I just had a realization with this episode -- maybe I'm a little (lot) late to this -- the Techno Union is the techno union because they're cyborgs! D'oh!

What struck me about this episode on this viewing is that it's about people as property. Wat Tambor is upset that Rex and the gang have come for Echo, because, in his mind, Echo is his property. They are stealing from him!
Which, again, raises the whole question of the clone army and the clones as property of the Jedi. They never talk about it as such, and, to be fair, the Jedi were not actually the ones who purchased the clone army, but they were purchased and do belong to the Jedi and to the Republic. I feel like this is a whole avenue of exploration that would make an excellent season eight.

Hear me, Disney? Do season eight!
Come on; you know you want to. Or someone does.
Dave Filoni and Kilian Plunkett, I bet.
Make it happen, guys!

And here are my thoughts from my previous viewing:

Decimate is one of those words I can't stand to hear used, not because I have anything against the word itself but because no one uses it correctly. As someone who values language and the meaning of words, it's a little more than annoying. Imagine my reaction to the "organic decimator" device. Really? Because that's gross. Not to mention the part where "organic" is used as a substitute for... I don't even know, because, of course, this is a weapon designed for use against the clones, so Wat Tambor seems to be able to stand by while it's used without any care at all.

So, sure, I get that organic decimator sounds (sort of) cool, but, really? Be more on point with your terminology.

Anyway, as it turns out, Echo was still alive. Or being kept alive. It's not clear how much of what's left of Echo is still Echo, but they have to get him out of the hands of the Techno Union to stop the stream of tactics and information they've been streaming out of Echo's head.

Oh, and it turns out those creepy new battle droids are a bit like flying monkey droids. I really wish they'd made it into the series.

"I'm guessing no one wants to hear the odds of us making it across here... alive?"

It seems I'm not the only one who didn't like "organic decimator" as a name for the weapon as it was only referred to as a decimator this time around. Which is better. "Decimator" is still problematic, but it's better than "organic decimator."

And I guess that's it for this episode.
See you next time.
Or something.
Posted by Andrew Leon at 12:00 AM