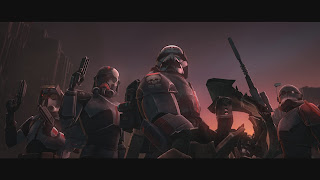 -- Embrace others for their differences, for that makes you whole.

Despite being called The Clone Wars, the series doesn't much deal with the clones. Sure, they are in most of the episodes, but the clones are generally supporting characters for the Jedi, especially Anakin and Obi-Wan. Don't get me wrong, this is not something that I mind. The relationship between Anakin and Obi-Wan is central to, basically, all of Star Wars, and I have enjoyed immensely the more detailed exploration of that relationship. However, the occasional episodes that focus specifically on the clones, in which the Jedi are mostly absent, are also nice, and this is one of the best of those episodes.

"The Bad Batch" introduces us to four new clones: Hunter, Wrecker, Crosshair, and Tech; clones which are not quite "right." As we saw somewhat early on in Clone Wars, the clones sometimes suffer mutations. Generally speaking, those clones are kept around in menial position, like janitor, or scrapped completely; however, there are sometimes "positive mutations" which makes those clones valuable assets, thus the Bad Batch.

I'm going to say that I enjoyed these four much more this time than when I watched this episode in its unfinished form. At the time, I felt like this was dangerously close to being nothing more than an X-Men knockoff, a way of adding some variety to the very static clones, but I think, now, that it's a little more than that. Not to mention that it allows them to tell this story about the clones without the need of including any Jedi in it. On the surface, there's this idea of accepting those who are different in some way, but I think the actual thrust here is being accepting of those around us whom we deem "normal." Or, maybe, that's just me, but I know I have my issues in dealing with Regs, so that's what struck me about this episode this time around.

And, now, my thoughts back when I watched it the first time, more than two years ago:

It's been a while since we've had Cody and Rex together in an episode. Thinking back on it, it seems that it's been that Cody has been missing for a while. Or not mentioned. Rex pops up here and there, but I can't remember the last episode with Commander Cody. Sure, yeah, I could go look it up, but it's not that big a deal, just an idle curiosity now that they're teamed together again.

Against our old pal Admiral Trench... who just keeps coming back. He's worse than Grievous.

They're joined by a squad of defective clones, Clone Force 99. If you remember way back to season three, you might remember clone 99, for whom the squad is named. These are clones who didn't turn out quite right but who have beneficial, let's say, mutations. Sort of like the X-Men of clones. Basically, they have a special mission, and they need a group that is a bit... unconventional. You can't get more unconventional than Clone Force 99.

And then we have an echo of an old character long thought dead...

That's all I'm going to give you. The hint should be enough.