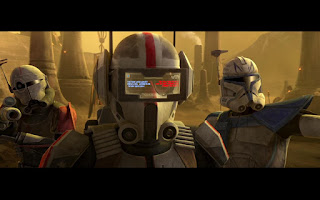 -- The search for truth begins with belief.

As we discovered last episode, Rex believes that Echo is still alive. He believes that the Separatists have been using him to predict the clone's battle tactics. No one really believes him. But the clones of the Bad Batch don't really care one way or the other as long as they're going to get to take out some clankers. Yes, all of this means a rescue mission.

Well, okay, it's only a rescue mission to Rex. Everyone else is just following the signal from last episode back to its origin point so that they can figure out how it is the Separatists are so accurately predicting their moves.

There are some interesting new droids introduced in this episode, but I don't know what they're called. Kind of weird and cool looking.

Padme is sexy nose art on the Bad Batch's spacecraft, and Anakin is not pleased. Ah, the amusing things this show throws in and just another reason I'm still sad it ended.

Rex believes Echo is still alive and mounts a covert operation to rescue him, so covert even the Jedi Council doesn't know about it... because, well, they said "no" to the idea of the mission in the first place. And, of course, if there's something going on that the Council has said no to, it's a safe bet to assume that Anakin's involved, which he is. It's also a safe bet to assume that Obi-Wan knows about it but is standing the side. I just realized I don't know what I think about that.

Basically, Obi-Wan, by repeatedly allowing Anakin to disobey the Jedi Council without consequences, has completely undermined the authority of the Council, at least in regards to Anakin. Maybe it's no wonder things turned out the way they did?

Though there's not much left to say about the episode other than that it looks as if it was introducing a creepy new type of battle droid. It's too bad those didn't make it into a final version.

Oh, and Rex gets into it with one of the members of the Bad Batch.

"Hope nobody's scared of heights."
"Well, I'm not scared of nuthin'. I just... When I'm up real high, I got a problem with gravity."

They took out the part with Padme as nose art. That makes me kind of sad. It was an amusing gag that revealed a bit more of the wider universe and reinforced some more of Anakin's lack of control over his emotions.

They also took out the explicit "no" from the Jedi council. At least, I think they did. I'm assuming, based on what I wrote, there was an explicit "no" attached to this, but I don't really remember. This time around, though, any "no" was only implied. Obi-Wan never actually tells Anakin the answer because Anakin sort of bulldozes over what Obi-Wan is trying to say and takes off with Rex to go on the mission.

But we do find out this time around that Obi-Wan knows that Anakin has been talking to Padme on the sly.

Mostly, I feel like they took out some of the nuance this episode originally held, which is really too bad, and it makes me wonder what other kinds of things like this never made it into other final episodes. I like nuance.
Maybe that's just me.
Posted by Andrew Leon at 12:00 AM