The Women of the Copper Country (a book review post) 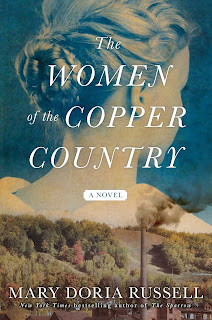 As I've mentioned many, many times before, Mary Doria Russell is one of my favorite authors. I've read every book she's written and am fully invested in reading anything she publishes. In fact, her book, The Sparrow, is one of the three books I think everyone should read. And you should read it. Make it next on your list. Seriously.
Just be ready to cry.

All of that said, I had a really difficult time with this book, and I'm not really sure why. Well, as with most things, it was probably a multitude of reasons, the primary being that, when I first started it, I wasn't really having much time to read, so I was reading something like two to three pages every three or four days. That can make it really difficult to find your place in a book, but there wasn't really anything there driving me to get back into it, either.

Maybe it's that it resonates so much with things going on today, which may or may not have to do with why she chose to write this book at this particular time. You can look up a synopsis but, in brief, it's about a labor strike at a copper mine in the early 1900s. As with all of Russell's historical fiction, the book is extensively researched and as close to fact as you can expect to get in a work of fiction. She even tells you where she bent the facts to fit into a novel structure so that you can avoid presenting the novel as literal truth.

Being about a labor strike, there's not much positive going on in the book for the protagonist and her friends, especially in the time period that this happened. At the time, labor unions had no legal protections and, well, all sorts of stuff that I don't want to spend time writing about. It's all history, and you can look it up. At any rate, it resonates very strongly with our current political climate, one in which labor unions have the least power that they've had in almost a century and workers are constantly exploited. In fact, my wife was listening to something from a law firm just this morning where the lawyer was talking about how they hire virtual workers in other countries because they only have to pay them about a third as much and don't have to pay for health care and all sorts of other things for employees they have in other countries. It was very sad to me to listen to her go on and on about the benefits of exploiting workers simply because they don't live in the United States.

So, yeah, exploitation by the rich. The whole thing is depressing, and it really made much of the book difficult to get through. For me, anyway. My wife had much less of a problem with the book.

It does pick up... hmm... I don't know, somewhere past the halfway mark. Not that it gets better for the characters, but the pace of the book picks up, and it became a more compelling read.

I guess the real question, then, is whether I think you should the book, and my answer is yes. Absolutely yes.
Just because it's difficult doesn't mean you shouldn't read it. It's a very timely book and should be read. Just be prepared to struggle with it. And to struggle with the ending. I can't promise any good times from this one.
But, you know, maybe it will inspire some action.
Posted by Andrew Leon at 12:00 AM